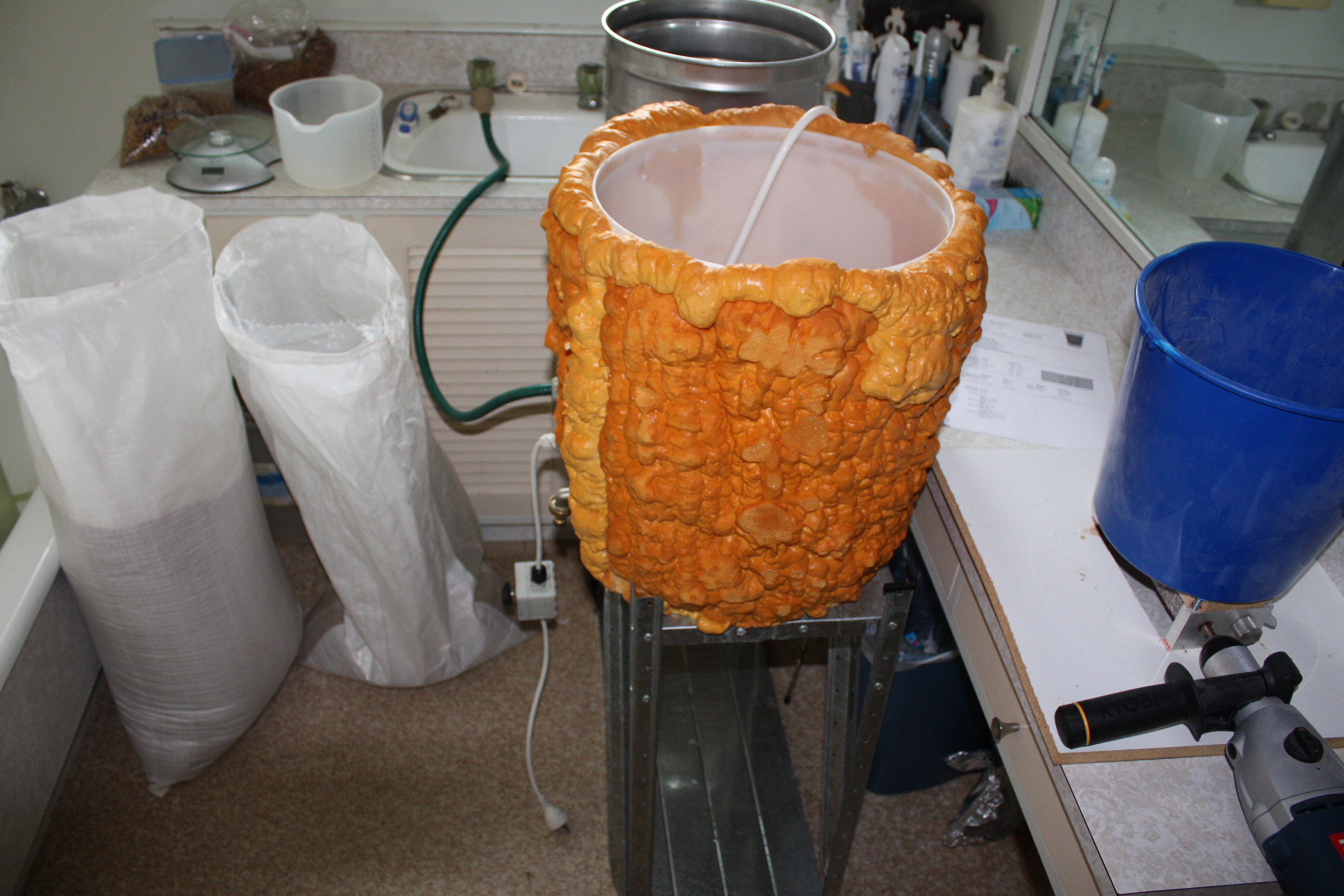 This photo was probably the best part of the brewday: i.e. before I had even started! So I had been planning a Dubbel for quite some time - about a month ago, Mike Neilson was kind enough to send me up some WyEast 3787 from one of his smack packs. Unfortunately, it leaked in transit and I only had about 5mls of smack pack juice to crank this beer. I started the propogation process by pitching the small amount of yeast into 500mls of 1.020 wort on the stirplate... then I went up to Auckland for a fortnight. While I was down there, my lovely assisstant brewer scaled the process up by pitching that small starter into 2 litres of 1.040 wort on the stirplate. When I got back down from Auckland, I was lucky enough to have 140mls of pure yeast in the bottom of my flask... perfect! I pulled the ingredients from my hotwater cupboard and got started on this beast: 5KG Global Pisner Malt... ( 400gm Global Munich 250gm Melanoidin Malt 250gm CaraAroma Malt 250gm White Sugar 18g Nugget 11.6% boiled for 60mins I had some pretty good efficiency, and ended up with 1.064 with the above recipe, but there were a few problems in calculating it... 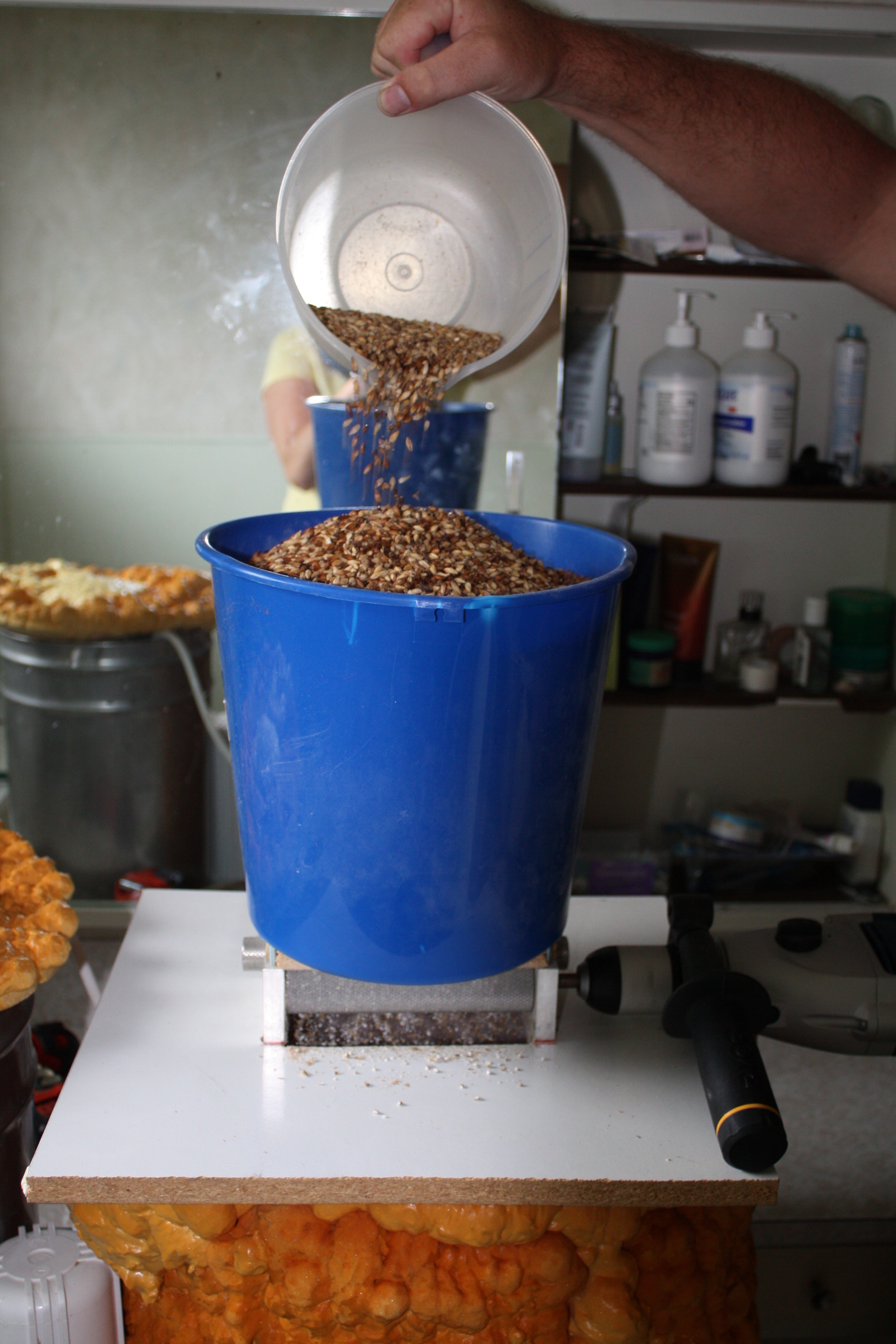 < I knew my hopper was too small, but I have devised a cunning method for making up for the shrtfall in volume. Everything was still running well to this point. So I mashed in - 65 degrees on the dot. An hour later, I aded 7.2 Litres of boiling water to bring it up to 72 degrees - and I started recirculating. This was the problem, I think. 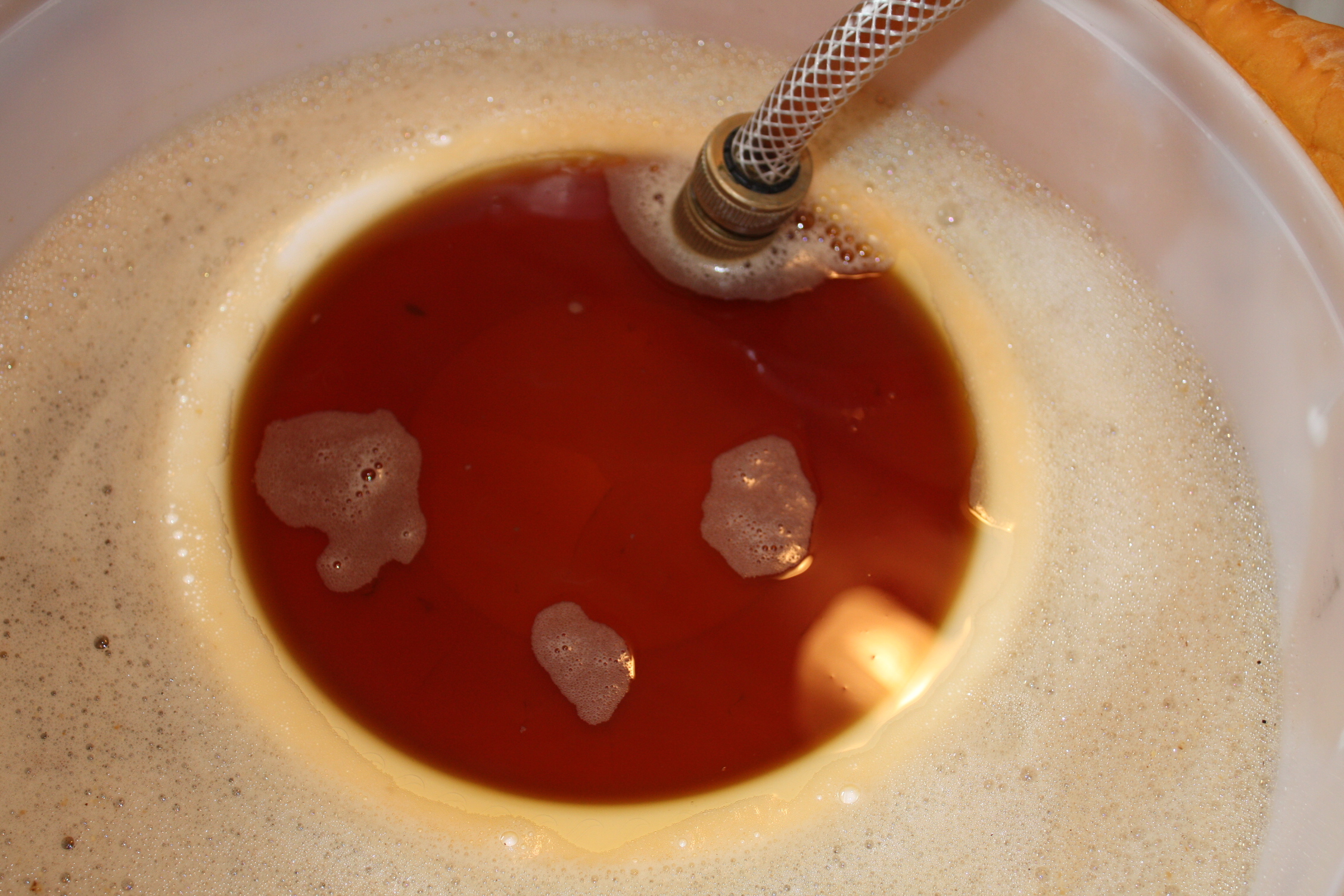 I didn't allow enough time for the grain bed to re establish itself before I applied vaccuum to the bottom of the mash tun. I thought that the flow was slow enough so I didn't think it would matter. Anyway - I recirculated for 15mins, and the wort ran very clear... gotta love that Global Malt! I collected 4 Litres and gave it to the assistant brewer to work her majic... You see, I am not a big fan of the Candi sugar taste in dubbels - but I know it has to be in there for style, so my thinking on this was that I could caramelise some of my 1st running with cirtrc acid and I'll have a similar flavour from this process. It tasted great when reduced to 1 litre - and I was thinking that I wasn't gonna put it in, as this would be a great source of nutrition for my pregnant wife... oh well - I added it back to the boil anyway. And Christina was lucky enough to clean the pot for me ! So when I had 4 litres in the kettle - the runoff was noticably slow. I had a feel of the grain bed with my spatula, and it was as hard as concrete... 2 hours later, I had my volume in the kettle. I dont know what I was thinking, but I collected 3 Litres too many - so I decided to boil for 2 hours. In the end I had too much volume in the kettle I tried to pitch my yeast, but I had been pumping for too long - the head of foam on the top didn't allow the liquid yeast into my fermenter. I was concerned - but it started fermenting with a total of 12hrs lag at 22 degrees. There is only about a litre of headspace in the carboy - so I'm expecting a serious mess within the next few days. And I managed all of this under the influence of 3 of Mike Neilsons beers... I am starting to think that next time I trade beer with people that I need to know the ABV of the beer. Mate - I was pissed after his Dubbel and his IPA... then I decided to drink his IIPA at 11% abv for shits and giggles... no wonder I couldn't see the sight glass on the kettle when I was collecting my wort! It was all good stuff though... well fermented and very clean. Keep up the good work Mike.

Comment by JoKing on March 7, 2009 at 6:05pm
Yeah - but while I was into my 2nd hour of trying to get some flow out of the bottom of my mash tun, I was very much in appreciation of that 11%abv - it made me consider that things in life aren't all that bad! Plus it had some other unreal flavours in there. Should have quite the shelf life.

Comment by JoKing on March 8, 2009 at 5:40pm
I'm pretty chuffed - there was only 12 hours of lag here - and shes been going hard at 22 degrees for 36 hours with a huge blowoff! Again - thanks for the yeast, Mike - and James_P... I got that Danfos running like a charm here: no deviation from 22 degrees since pitching the yeast. Lets hope I dont get any Isoamyl-Acetate with the warmer ferment! I did pitch a good amount of yeast (I think) - so fingers crossed. 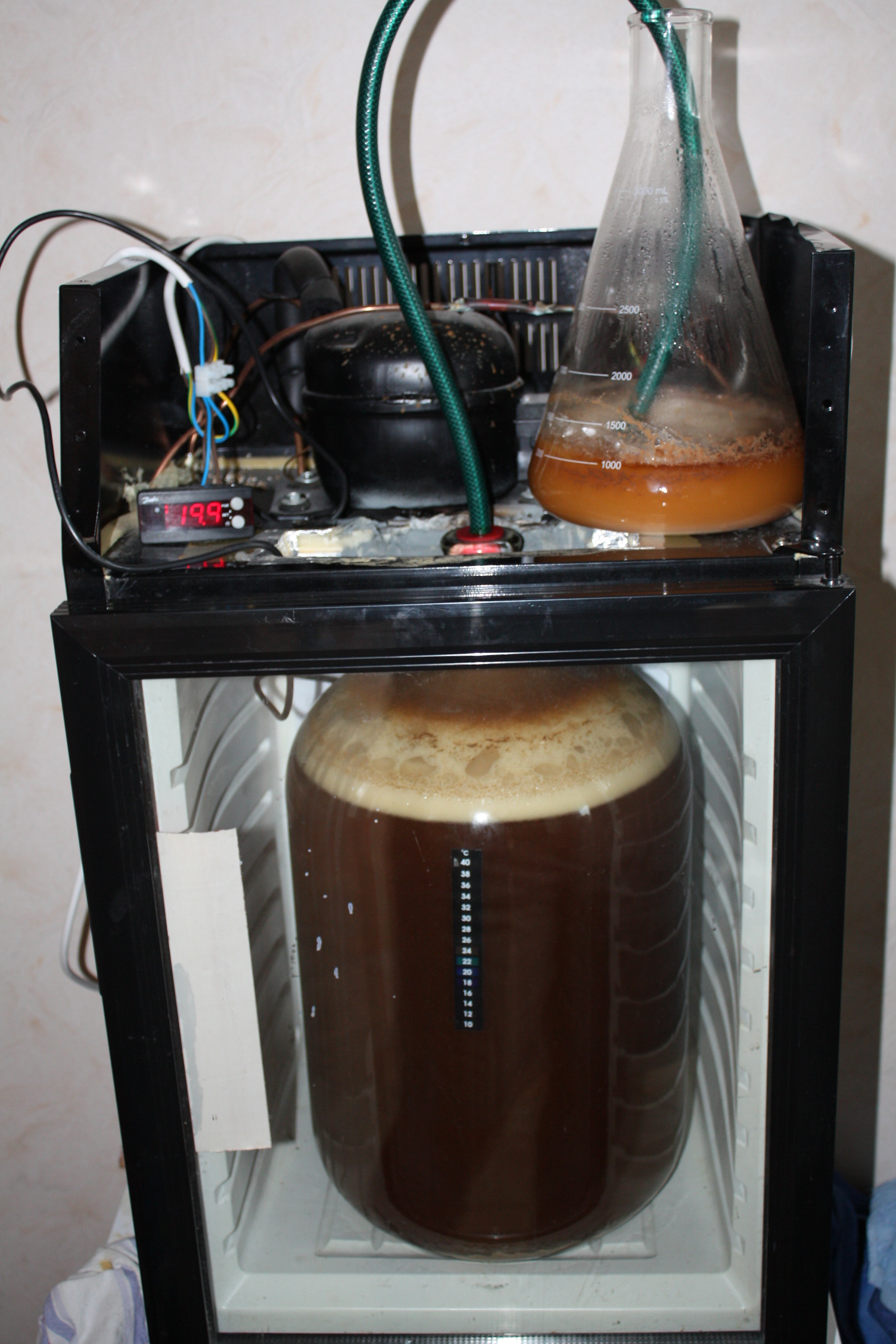 I've lost a litre of beer in the last 3 days due to an extremely vigorous fermentation. The gravity is down to1.032 - hopefully all this positive stuff keeps up.

Comment by NVIOUS on March 22, 2009 at 10:00pm
I am a lucky bastard!!
Why you ask?
I will tell you.......
Recently I have been lucky enough to receive a delivery from the Naki containing one bottle of trouble trouble.
Seeing as it only flowed into the keg yesterday it was a bit green.
Could I tell?
Not at all.
Superb!!!!
I will strive to make it my mission to brew this beer myself. If I can make it half as good you can call me Larry!
Wicked Bro. Definatly save me some more for the head wetting!!

Comment by JoKing on March 23, 2009 at 10:24am
Thanks for the very kind words, mate. It will be a challenge keeping enough stock in hand for the Head Wetting, but seeing as you like it so much - I'll do my best!

Comment by JoKing on March 30, 2009 at 10:14am
So th Baby has been conditioning for nearly a fortnight, and I thought I'd give her a test run... SUPERB!!!!! Has dried out, carbonation is up to about 3.5. Flavour is crispening up - I could drink it all night long.

Go the 3787 - top quality strain. I had my doubts for a while - but this beer has vindicated the strain. My favourite out of the 5 or 6 that I have tried. 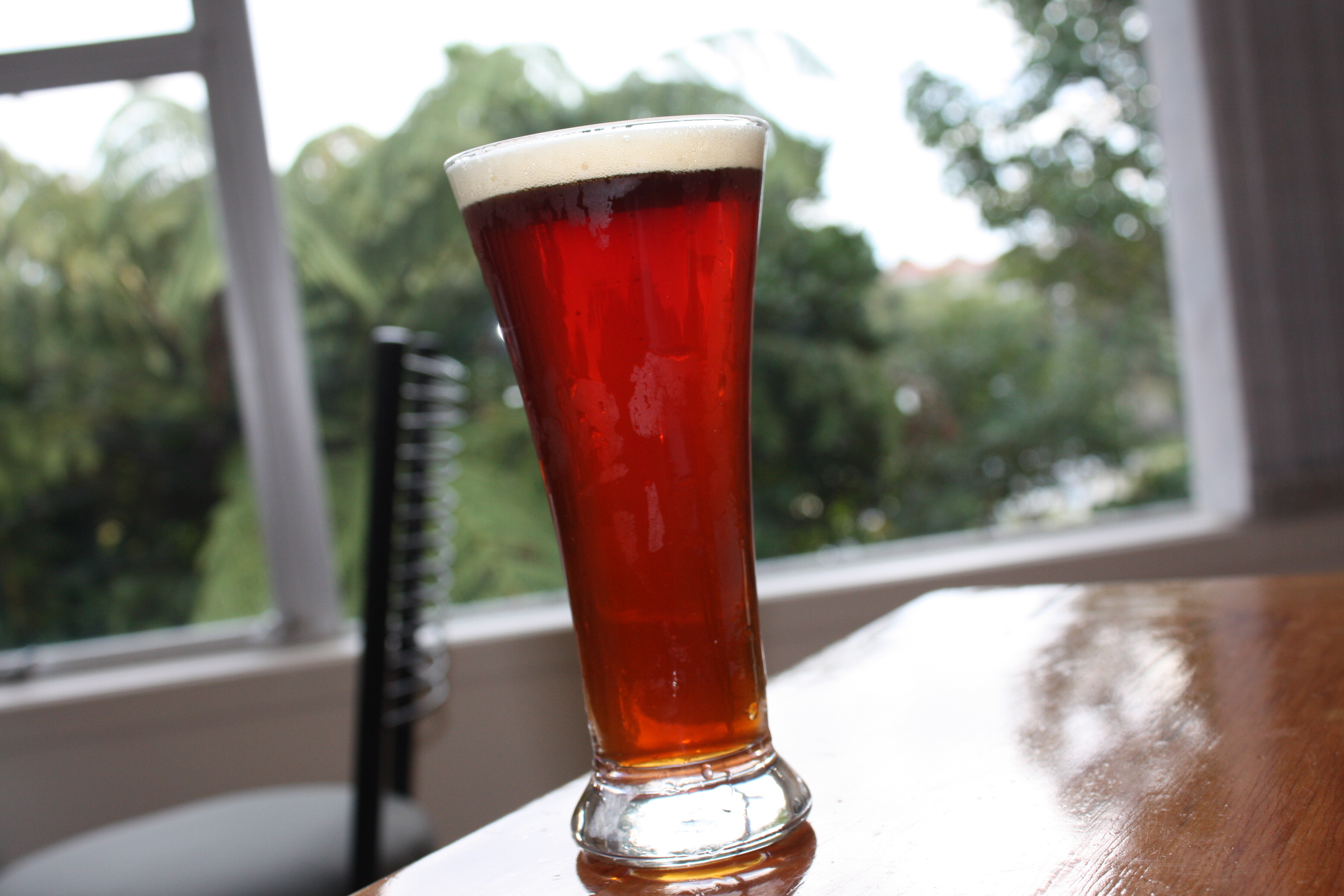 Taste has improved yet... trying to save some for NVIOUS is proving to be difficult. This seems to be the tap that I walk towards when I need a beer. Perfect pint for the brisk weather we have been experiencing here in New Plymouth.