I didn't know quite how to start this blog, because I've built this beer up in my head over the last 7 months - as soon as I found out that Christina was pregnant. We took the test, it came back positive, and within minutes after I said "we're having a baby!" were the words "that's it - I'm brewing a Celebration Ale, we're having a party - and we'll crack the keg then!!!!" Well, the time has come. On a miserable Wednesday afternoon I made the managerial decision to leave work early and come home to my wife and my brew - to be named after the child once it's born... naked. I decided to base the brew one of my favourite beers in the world: Pliny the Elder. The recipe is loosely based on Vinny's home brew version, but I hopped it up a bit. Heres the recipe: ABV 9% IBU 277 Colour 8.9SRM 7.50kg Golden Promise Malt .300kg Pale Wheat Malt .300kg Caramel Malt 33L .800kg Plain Old Fashioned White Table Sugar And then the fun part - it took some head scratching to figure out quite how to add it to the brew in the correct quantities. 70g Chinook (11.1%) 90mins 70g Nugget (11.6%) 90mins 50g Simcoe (12.3%) 45mins 30g Colombus (13.7%) 30mins 50g Cascade (5.5%) 10mins 20g Chinook (11.1%) 10mins 60g Centennial (7.2%) 0min 30g Simcoe (12.3%) 0min These ones haven't been added yet - and I'll post some pics when I do add them as this addition is equally as important as the boil additions: 60g Colombus 50g Simcoe 50g Amarillo 50g Cascade 30g Centennial Indeed this momentus beer will be drank to celebrate a momentus milestone in my own, and Christinas lives. Please take the time to share this special brew with me! First off - of course is the mash. My hopper wasn't big enough to hold all of the grain - and neither was my measuring containers! I managed to get it in there though - and at an LGR of 2.5:1 (my favourite for a single infusion - wonderful mouthfeel!) There was enough space in the mash tun to fit it all in - I think I may have been able to get another kilo of malt in there... maybe next time. 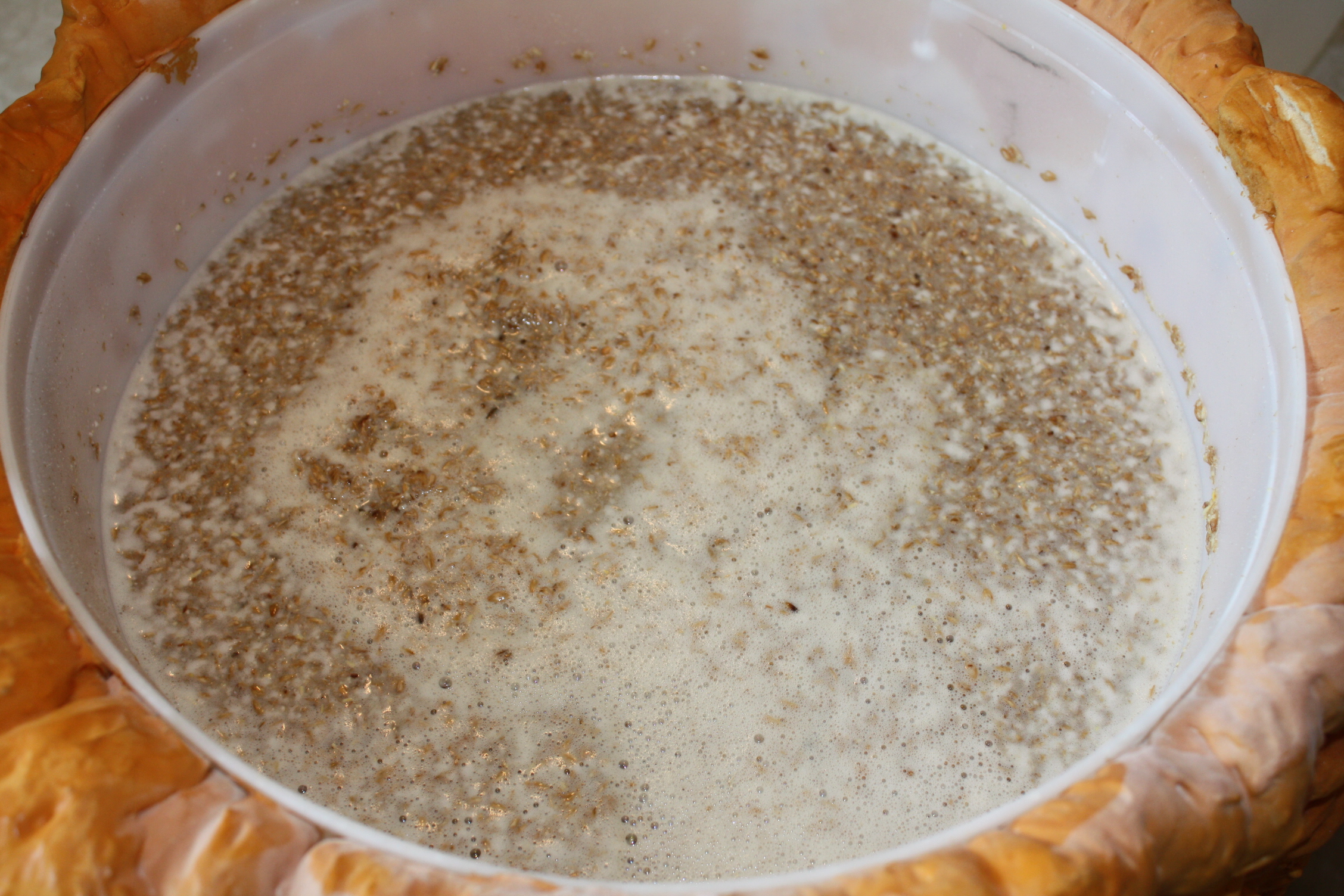 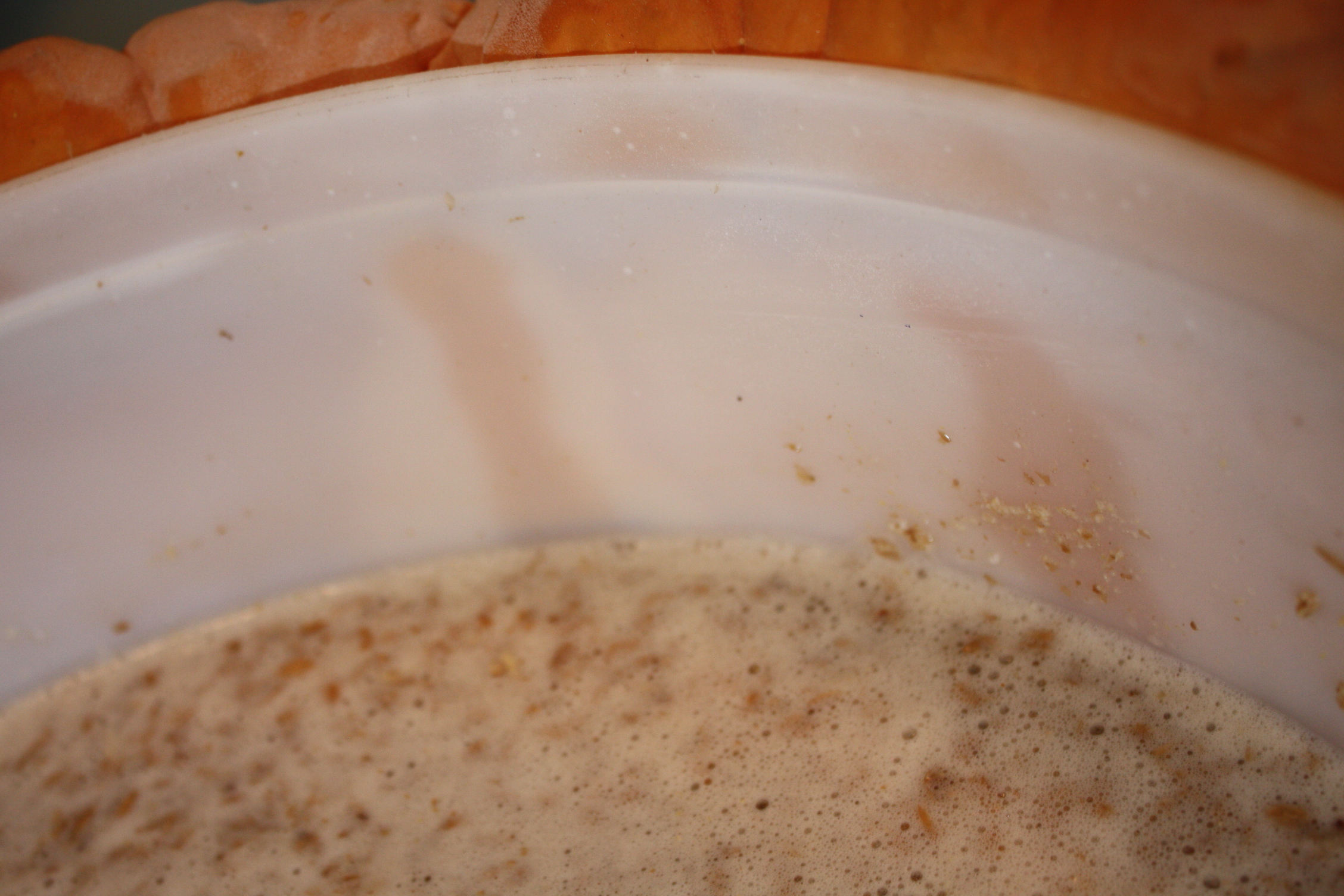 There was 28 Litres of mash in total - a fair amount more than my previous brew that stuck... I was a bit wary. While this 90min mash was sitting, I did a few jobs - one of which was filling the HLT with water and heating it whilst recirculating it. One small problem though... the pump wasn't kicking into life! A bit of mucking around sorted that out... I was still anxious about something going horrifically wrong with this brew! Once I hit 75mins of mash time, I swapped the pump over to the Mash Tun and recirculated for some 15mins. Onto the Lauter - no issues here apart from collecting too much wort again. It didn't bother me, because I knew how much leftovers were going to be in the kettle at the end of the boil. I Collected nearly 34 Litres of wort. Onto the boil. I let her go for half an hout before I added any hops - which was good... because it took me that long to sort them all out! 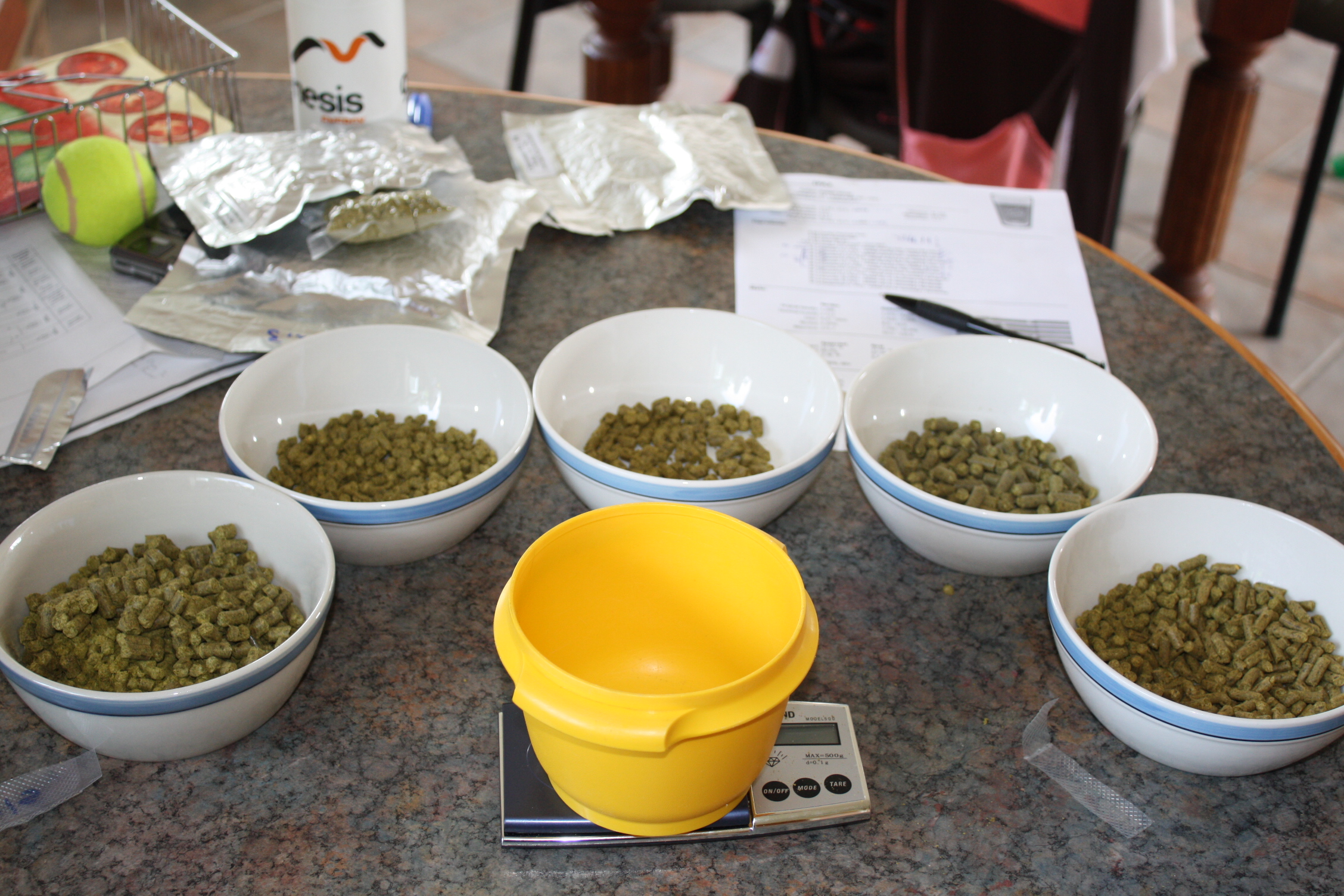 The end of the boil arrived quicker that I expected, so I had 10mins to put the immersion chiller in and get that pump pumping sterile boiling wort. Then came the final addition of hops, and the cooling of the wort. Still no probs - apart from the cold hose popped off the chiller (I turned the tap on too fast). I think I lost a minute of chilling time - but nearly killed myself by electrocution! And then came the biggest issue! As the wort was cooling, the hops became less likey to want to be floating in the kettle, and the percentage of hops in the bottom increased... long story short - I blocked my pump with hops. This was the first time I have ever had this. I worked the valves on either side to create flow disturbances and pressure differentials - after a bit of time, the clog worked loose - and the whirlpool was going harder... good news. I waited a few hours, and transferred into the fermenter - I spent more time than ever with steralising absolutely everything that was to possibly touch the wort - no way was I going to get an infection! I was absolutely astounded to see the break material show itself when I only had about 15 Litres in the fermenter - there must have been so much stuff in the bottom of the kettle. Any way, I did the good thing and cut off when I collected 20 Litres. I did pump about 2 Litres of Breaky Wort into there - but I always do this, and the yeast eats about 25% of this material. I measured the material in the kettle and put them into 2 2L and a 1.5L container. 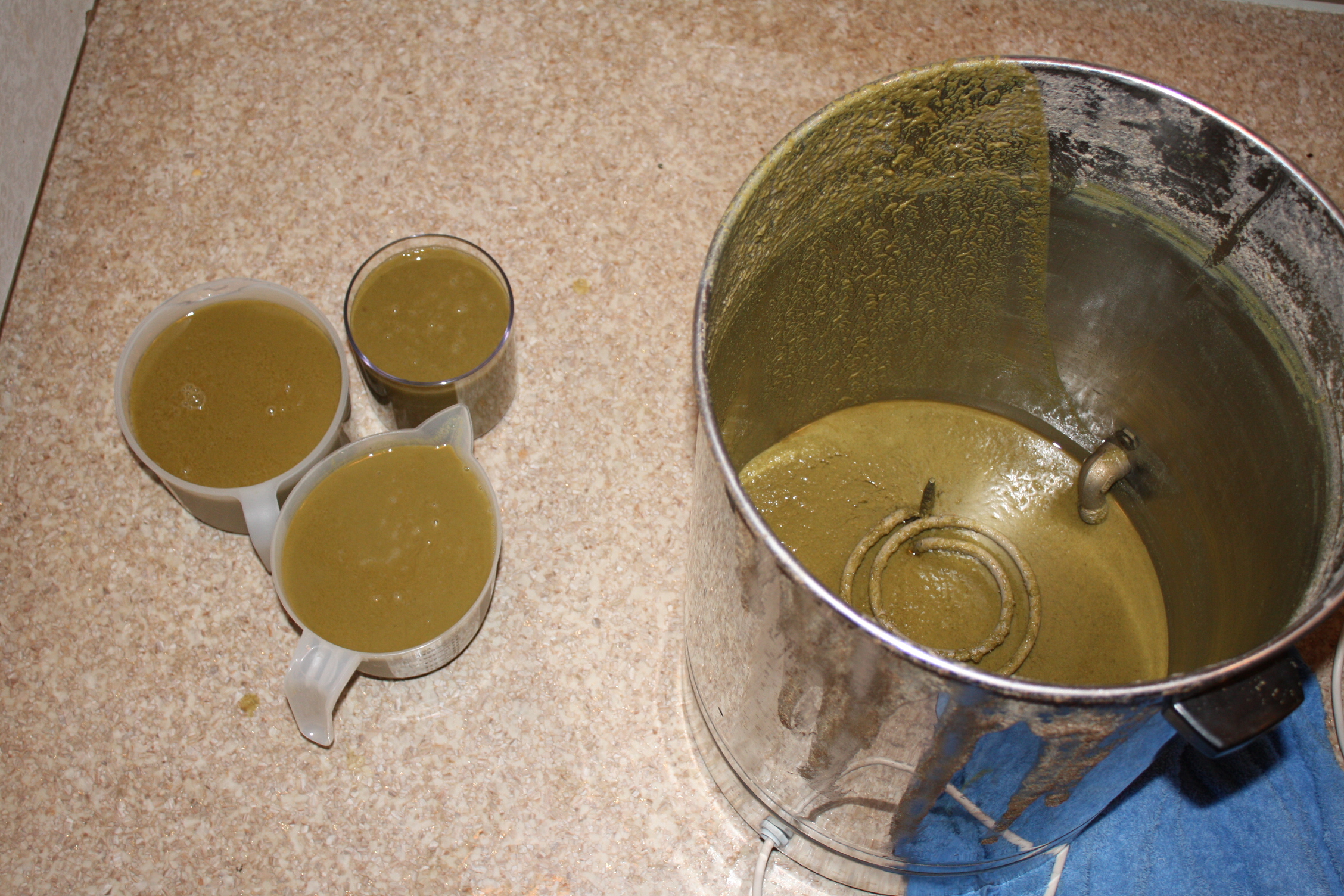 The wort was fairly hazy, as to be expected I suppose. 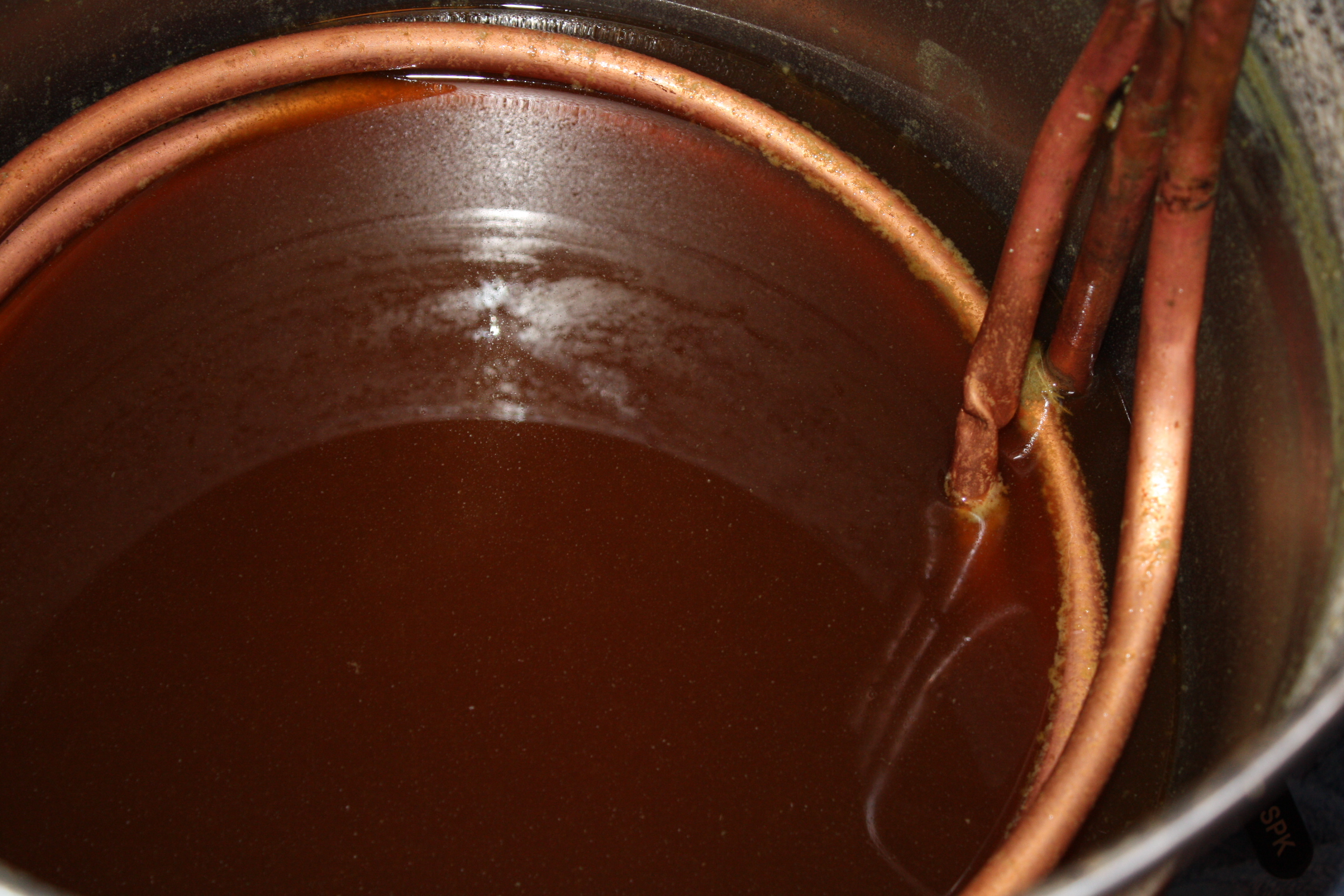 The taste was extremely difficult to describe. It was the most bitter thing I had ever tasted in my life. It was so bitter that it actually hurt my tongue. It would have quite the resiny type of feeling - and it would linger then have an evaporating feeling - like when you siphon petrol and accidentally get some in your mouth. The colour was beautiful - a gold with a rose tint. Finally, I'll mention the 3 container that I measured. I kept them in the fridge, and waited for them to settle out for 36 hours. In all, I managed to save 2 Litres of wort. I boiled this in my flask, cooled it and added it to the fermenter. I had to do this with Yakima Monster - so no adverse affects. I cooled it overnight in the fermenter, and pitched the yeast at 12 degrees. It is now fermenting at 17 - quite aggresively too. I had to fix a blowoff in the end. 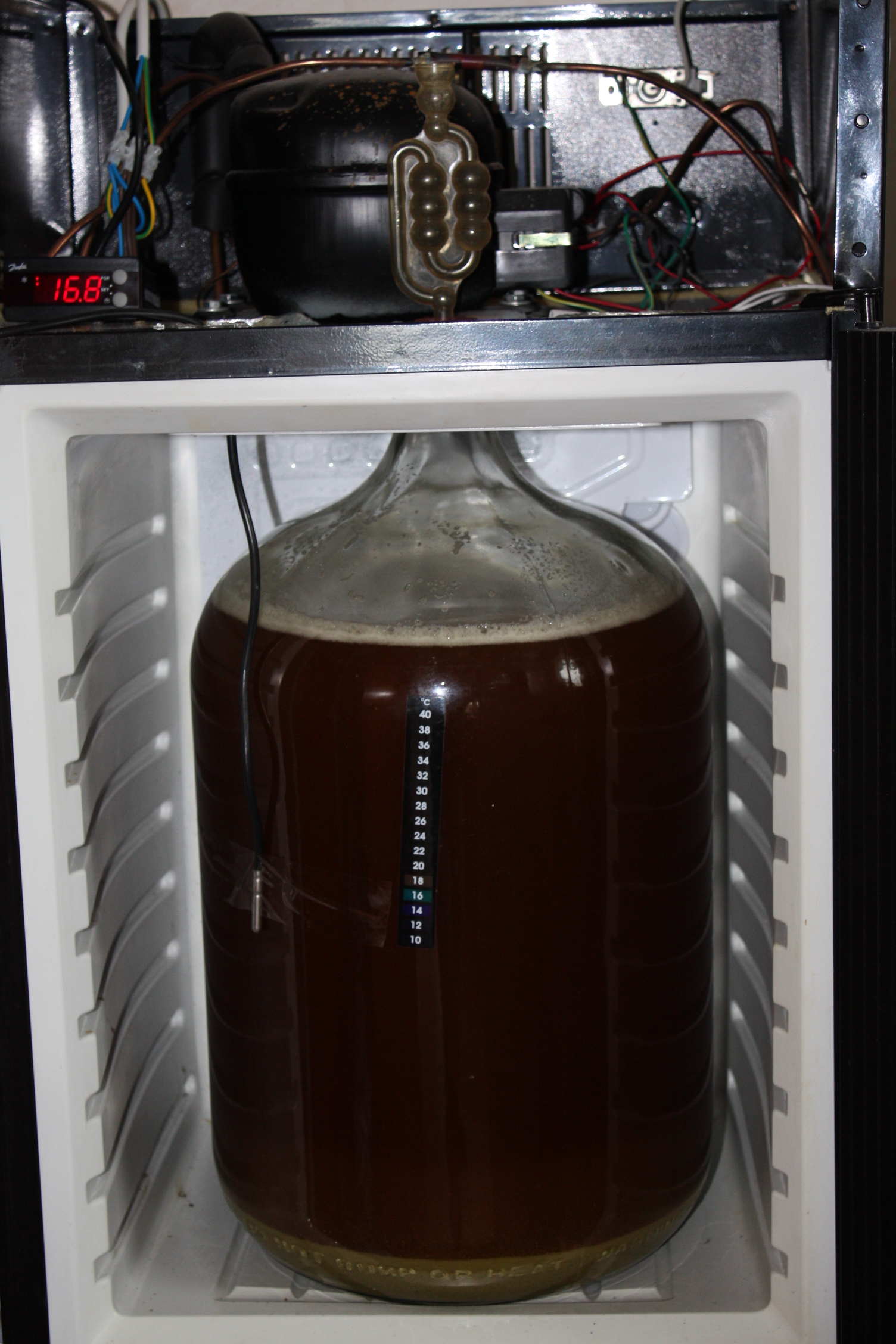 In the end there was 2.5 Litres of wet hop pellets - Something I've never seen before. Thanks for reading the novel here - but I wont be brewing another $100 for quite a while... lucky I had all the hops in my freezer from when the dollar was good aye? Cheers! Update Time!!!! I dry hopped the Naked IIPA this afternoon and below are the steps I took. I Dry hop in the Primary after full attenuation has been acheived. I'll let it sit at room temp now, for 10 days before Crash Cooling, then kegging. 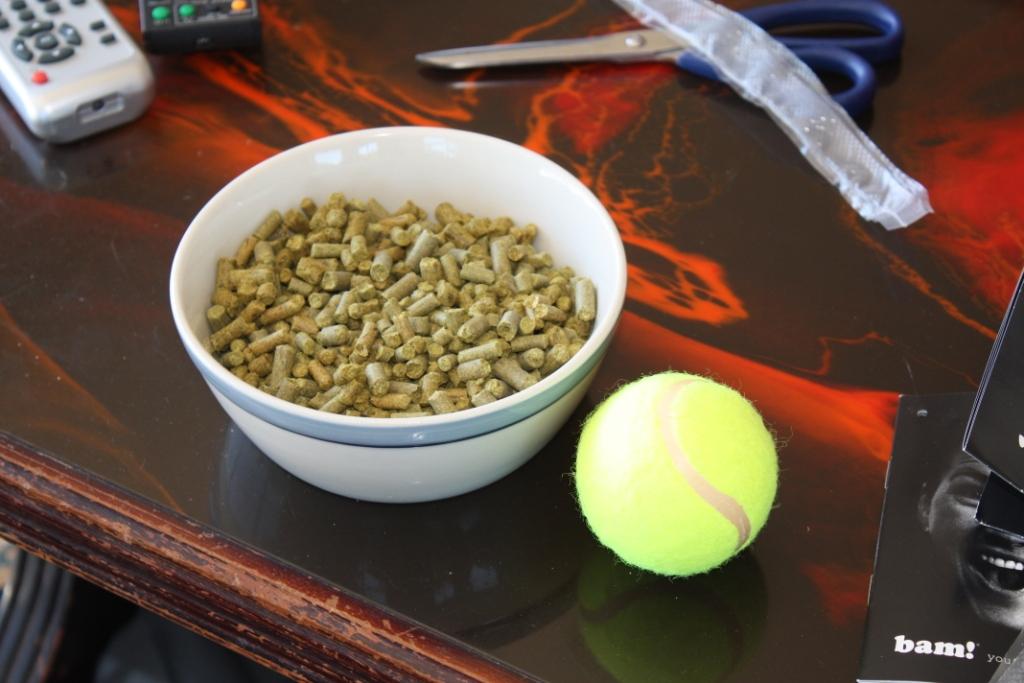 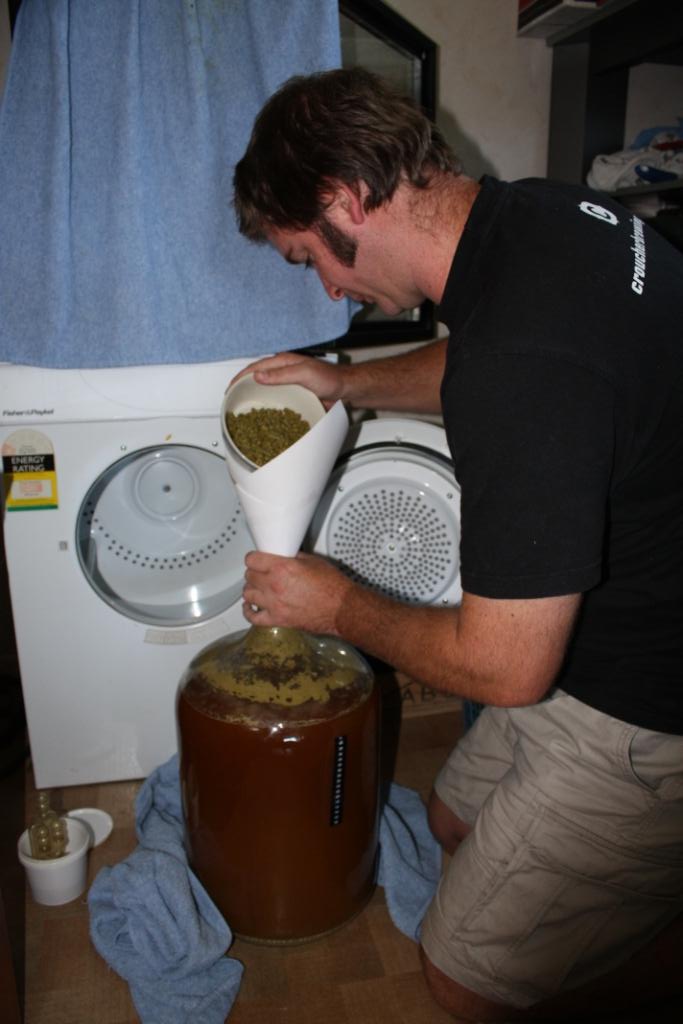 A home made funnel big enough to dump them in there. 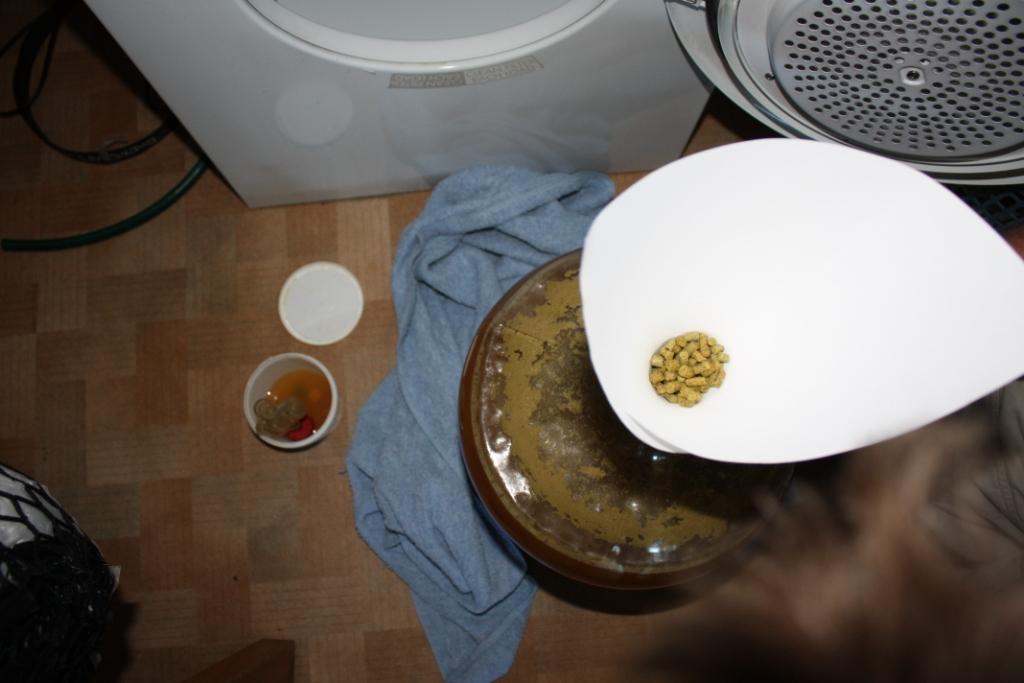 Looking In while the Hops are rehydrating 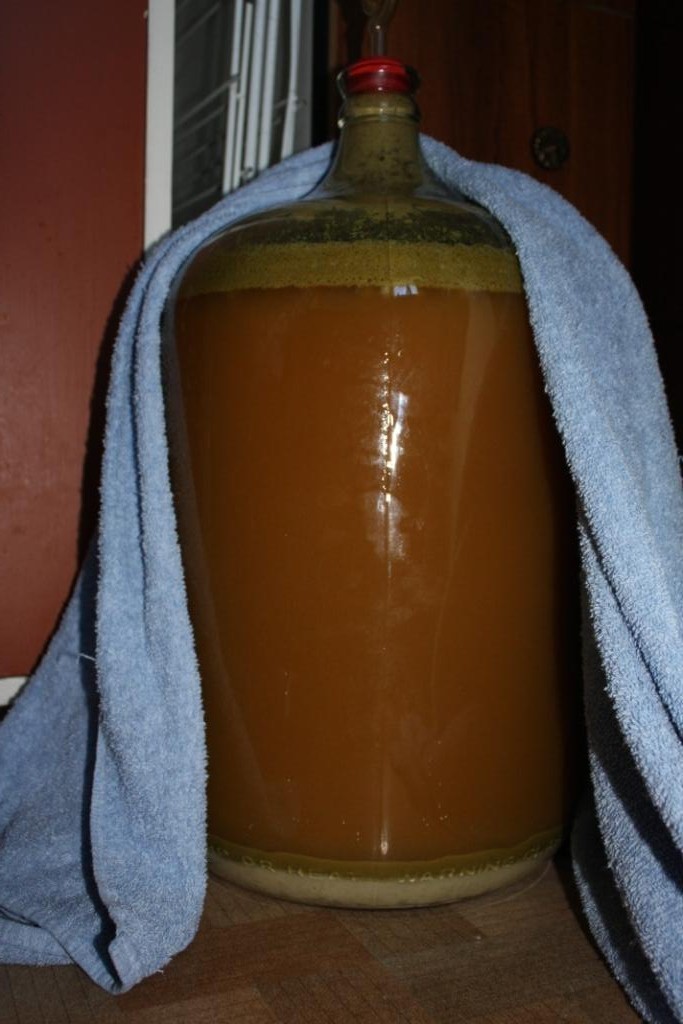 240g of hops rehydrated and floating / sunken in the brew. I will rouse (being careful not to disturb the yeast) once a day to ensure even distribution of hoppiness. Cheers!

Comment by JoKing on March 13, 2009 at 5:46pm
I love US-05... it is the best value for money and consitnently produces amazing beers. I dont know why craft brewers use wlp001 or wy1056 when this stuff is available for a fracion of the price.

Comment by Mike Neilson on March 13, 2009 at 6:05pm
With this new lot im going to got my confidence back with the stuff!! Im going to do a yeast off with 1056 and S05. This way I will find out what 3 verables were to blame yeast or me!! Made a starter with that yeast again all bubble gum aye im sure theres a well attenutive wheat belgian strain amongst it!

That's all I can say.

Comment by JoKing on March 14, 2009 at 10:04am
Thanks Glen - It's amazing the sense of satisfaction you get from this type of thing.

Comment by Stu McKinlay on March 15, 2009 at 8:56pm
Awesome Joking. Wishing you and Christina all the best for the baby... Still hoping you'll get down here one of these days. I'll be sure to have something special in the fridge for you, as long as you give me some warning.

Studio_1 - thanks for reading... Its a privelage to have comments from the forum members, as we are all brewers and as such reading blogs from over excited forum members could be seen as boring and ego massaging!

Stu - Thankyou very much for your well wishes. I will be coming down to the beer capital at least in the next 4 months, when things are set in stone - you and Mike will be the first to know. I will have this IIPA and a swag of other stuff with me.