Evening all. Am mid brew with a 55L batch of 1.079SG Porter which is about to come up to the boil and I thought Id share the loves. The recipe is a bit of a bastard 11kg Pale, 1.4 Crystal 60, 1kg black, 1kg chocolate, 1kg Rye, .6kg Caraaroma, 0.4melanoidin, 0.3kg special B. Obviously aiming for a meal of a beer. Hopping with a small dose of Pac Jade to 20IBu and 200G of Tettnager at flame out and fermenting with 04.

Reason I came on though is a few boys from the forum have been over in the last couple of weeks and were frothing on the setup, suggested I post some pics, so here it is in all of its rough-as-guts glory. Feel free to ask questions. Its electric and running a 3kw element in the kettle. HLT is roughly temp controlled using an STC1000 and a solid state relay switched on the low voltage side with 2 6V phone chargers (to achieve 12V, I told you it was rough ;). I think the element in that is 3kw too as the last blew, inspiring us to put in a float switch and and an RCD too.. Mash Tun is a shitty chinese pot wrapped in some not so shitty timber, pumped full of expanding foam. Has 3 outlets in the bottom of the pot manifolded together to meet the valve so it gets quite even draw through the grain bed. Laser cut false bottom, think I posted the files up for that a while back. Also use one of Chris Banks' sparge arms and fancy pot lid welded to an arm which fits on for the recirc. Camlock everywhere also. Its a pretty sweet setup, could be better in many areas (wouldnt mind adding RIMS to it), but functionally it works and makes nice beer, which is clearly a bonus. 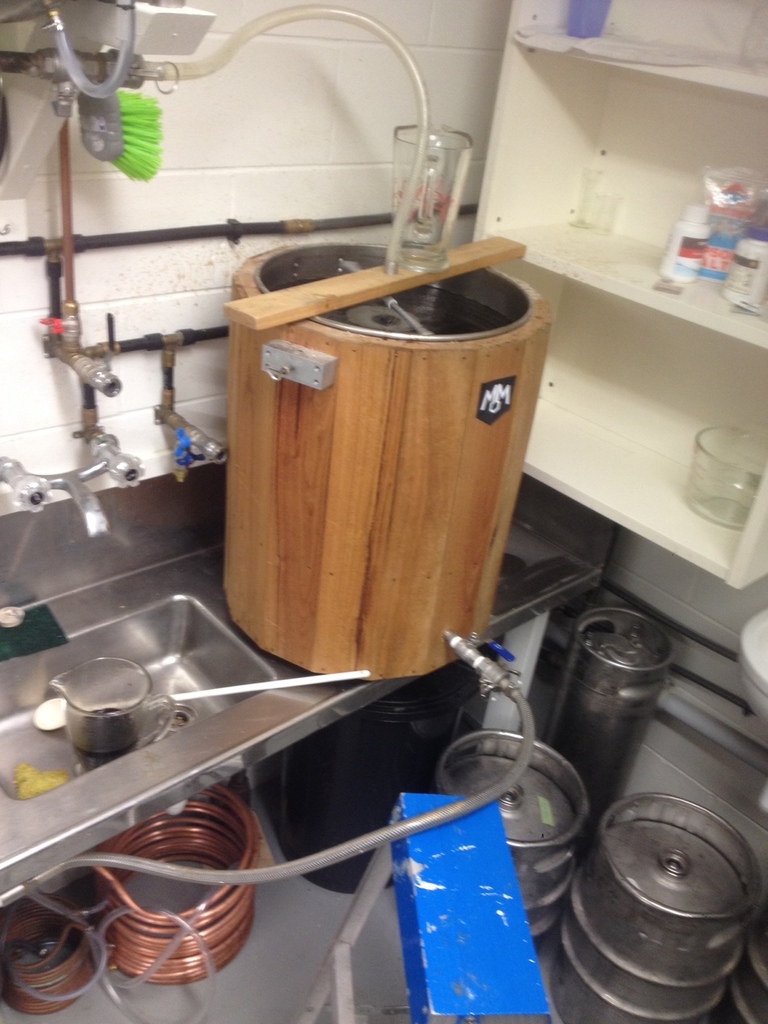 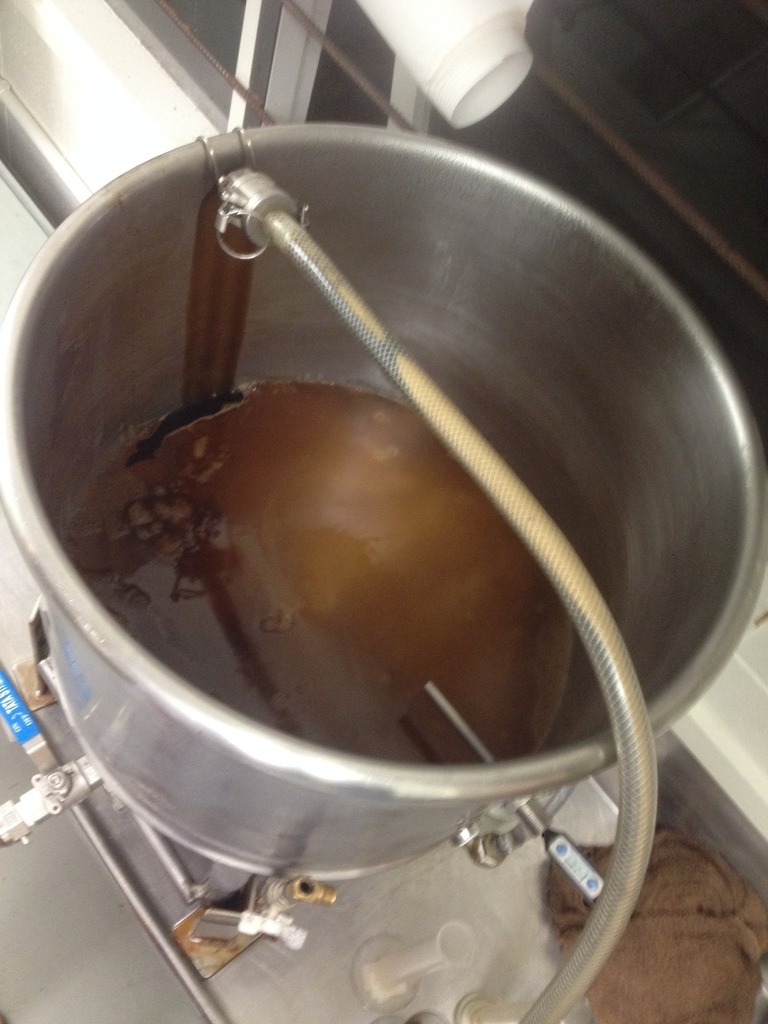 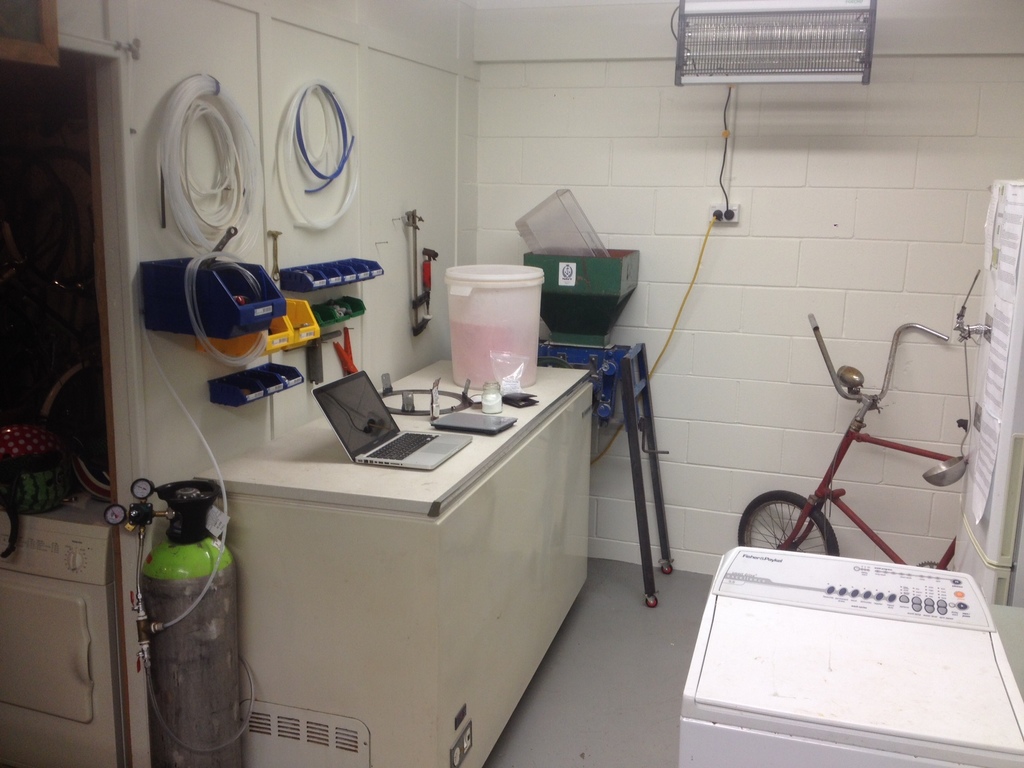 Comment by DMAC on September 27, 2014 at 6:54pm
So how big are your kettle and hlt and Is 3kw enough are are you needing note power?

More importantly, what fool put a washing machine into your brew house!

I assume the washing machine is only there because it is used for some sort of brewing purpose :-).

Daniel, the pots are a shade over 70L and I usually fill to between 62 and 65. Can usually get 50L out into kegs, though this batch I was busy messing about (probably writing this post) and over-filled, missed my numbers but 83% total efficiency so would have easily hit them if I was paying attention.. The 3kw gets a good rolling boil, not leaping out of the pot but churning nicely, the biggest issue is the pots are a big thermal mass which means getting up to boil is a bit slow but once there the heat is held so its a good boil, at the other end its a pain in the ass as you're mostly trying to scrub the heat out of the pots (3mm wall thickness) The bottom half is jacketed, which helps so I run cold through there too and the immersion chiller, but brewday is pretty long. I should probably throw another 500W at it to scrub some time off.. Brett to answer your question, the pots were old bakery mixers, hence the jackets in the bottom (raising dough). One actually had the mixing arm but it somehow got thrown out with the scrap when I moved to AK. If I had that I may have considered using it as the mash tun, although strike temps would have had to be massive to compensate for all the thermal mass to heat..that said the jacket may have sorted that too. Dunno, thats just how it is now and If I change it it will be to go bigger.

Of course the washing machine is for washing yeast... or maybe it just shit itself ;)

Nick,  Did you add the wood to the mash tun yourself?  I have a MT that is insulated but want to add wood to it.  After some local advice.   Very nice setup.

Hey Peter, yeah I geeked out and CAD'd it up first then the 2 boys I brew with made it as one of them owns a furniture factory. We basically made 2 hollow rings which go around the pots, and a base, then nailed the boards on the outside, and pumped it full of expanding foam as we went. I should post a pic of the lid, looks quite cool too. Its 10mm thick Fijian Kauri that was lying around unused from memory, it was a pretty simple build. Thanks mate. this is insulated but a bit more wont hurt...    there is a calc online that works out required angles to be spindled...

Nice, is that ex-dairy? Looks a decent size too. More insulation never hurts. I get less than a degree of drop over an hour which makes it worth the effort

Hey Nick. Just wondering what electrical plugs/sockets you are using for your brewing equipment?

I'm thinking of using the same circuit as our electric oven for my rig. I'm currently in a small rental flat and don't have power/water in our garage so brew in the kitchen. Currently the oven is wired in permanently but if I can get a high current plug/outlet I can unplug the stove and plug in my brewing rig on brew day. The nema L6-30 twist lock plugs/sockets seem like the most common option.

Aiming for 30L brews to optimise the space in my Malt Mechanics fermenter. I have a 63L pot (just doing BIAB at the moment) so I'm thinking about 5500W element should suffice. Still have to source one though.

Hey Daniel, the plugs and sockets are just standard stuff, our shed was all wired for 32A by a sparky and he knew what we were using it for. That said I have seen a bit of scorching on the wall socket where its obviously gotten a little hot..The plug is just one of those universal ones from the hardware store.. I am only running a 3kw element in a 66L kettle, get a pretty good boil, just a bit slow to get there.. and most of that is due to the pot being made of such thick stainless (2mm!) it robs a lot of heat. I would have though 5.5Kw was well overkill? Unless you are controlling it somehow so you can dial it back? Mine is just on or off