A BEGINNERS GUIDE TO AN EPIC BEER LABEL

An Epic beer label  generally has inside jokes, references to popular culture and memes (we like to have fun, be a bit silly, but clever at the same time. Tasting notes aren't always that valuable, as it is so subjective, and you can find plenty of peoples thoughts about taste online on beer rating websites.)

FRONT OF LABEL
“One Trick Pony” was a comment made by Phil Cook, Beer Writer of the Year 2012 in a blog post about the fact Epic only brews hoppy beers.

“One Trick Pony” was appropriate for this beer (Zythos at the time) as Epic was releasing another IPA, which give the range two IPA's at the time, so the coining of this tagline was now perfect.

Mosaic is a brand new hop variety, released from the 2012 US Hop Harvest (we had to go on a waiting list to be able to get an allocation at harvest time).

Unicorn in the shield – a unicorn is a horse of course, so theres the pony connection.

Sparkles on the label – to create a kind of Mosaic effect using new technology. Epic was first to use it. (follows the trend of using the latest technology in label production, i.e. Glow in the dark Hop Zombie label).


“... neutralize the poison” - “Unicorn horn has the power to render poisoned water potable and to heal sickness.” - Wikipedia.

“... no virgins needed to tame” - Unicorns could only be captured by a virgin – Wikipedia.
“Alicorn” - the substance a Unicorn horn is made of.

Many of the bottles have symbols on them, with references to varying things.

The little cat (felix the cat?) looking thing is actually an “Imp”, a term given to brewer Luke Nicholas by beer writer Neil Miller (as a term of endearment?) as he is refers to Luke as a small and mischievous brewer.

Three dots and two lines? Well we can't tell you everything. 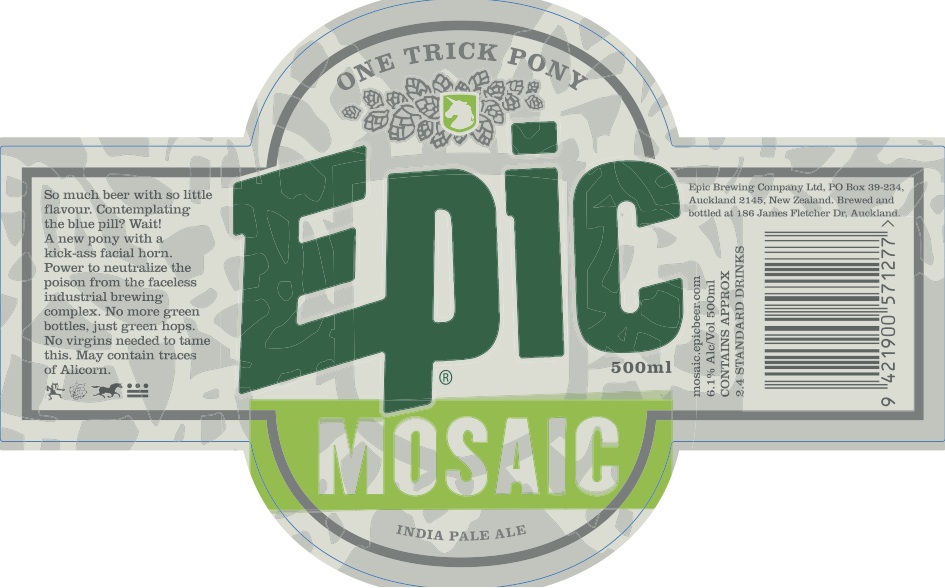 Morpheus: Do you believe in fate Neo?
Neo: No.
Morpheus: Why not?
Neo: Because i don't like the idea that I'm not in control of my life.