Brew day on Sunday 7 December 2014 started really late, I had to pick up the kids from their grandparents and do some other stuff but in truth I was scared. Scared at how much more involved the process might be with 2 pumps and 6 hoses, scared that I would forget things and spill stuff. Scared that something might fail half way through and I'd have to abort and waste ingredients and time.

Turns out I didn't need to be. The system worked nearly flawlessly and I'm pretty damn excited about using it again.

The system design is incredible. Brew day works as advertised and it all makes complete sense once you get started. It makes brew day a real treat having every part of the process catered for with well designed equipment.

Positives from the day were:

So the negatives. hardly any: 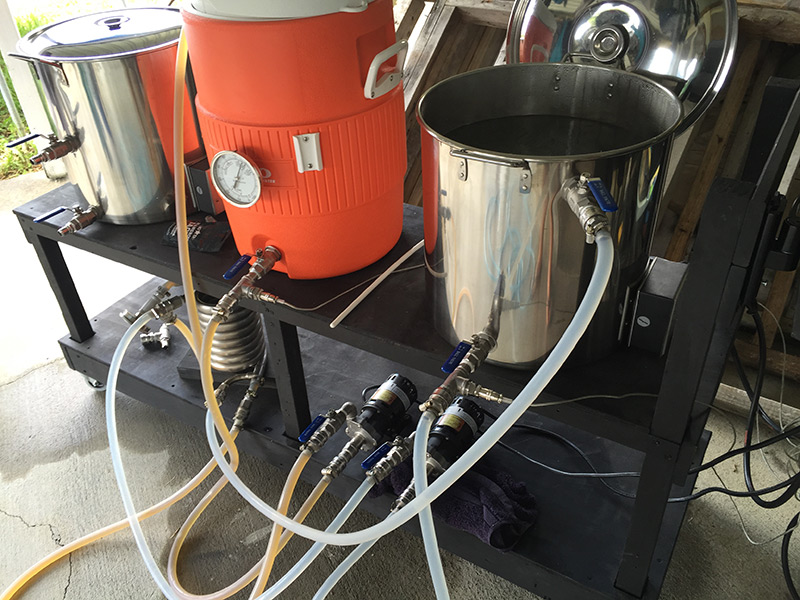 Clarity into the kettle was amazing. No vorlauf required, just pump directly across – benefits of a recirculating system.

Thanks for reading the series, hopefully I've helped a few of you with your decision making and building of your own systems.

Great looking system there Barry. Good the see the counter flow HERMs working out for you I will probably go that way If I ever set up a proper rig . Do you recon that 1.5 degree difference between the MLT and HLT is just due to heat loss in the hose or something else? Not that it really matters if its consistent.

It'll be combined heat loss from hoses, pumps, counterflow coil, through the mash tun to the bottom (temp probe is on the outlet).

Comment by DMAC on December 9, 2014 at 3:45pm
What sort of flow do you think you are getting? I'm thinking higher flow equals lower temp difference.

Not sure, don't have a flow meter. Chugger pump, inline 3/4 inlet stainless head.

Doesn't matter anyway, even Kals HLT mounted HERMs coil has a 1deg difference.  It's no drama at all to account for.

Yes I had the same issue and have switched to hop spider.

Maybe a dribble of loctite would seal up the leak in the elbow?

Comment by Barry on December 9, 2014 at 6:01pm
Cheers Scott, where'd you get the hop spider and if you don't mind me asking, how much?

Great write up, thanks. Been really useful for my own plans.

Comment by Scott H on December 10, 2014 at 7:17am
I made my hop spider from 3 SS coach bolts and a downpipe reducer Then used my old grain bag and a big hose clamp. Cost me about 30$ not incl cost of bag.
You can buy them from http://craftbrewing.co.nz/beer-gear/hop-spider