I've heard so many disheartening stories lately about people selling their brewing equipment, indeed when I look around realbeer now there's a distinct lack of the old guard, the legends who contributed so much knowledge to the fledgling all-grain brewing scene in NZ. In actual fact more than a few of those legends are now the legends who make up the very best of the best on the shelf at your favourite craft beer outlet and dominate the awards at BrewNZ. But I digress.

I intend to buck the trend. I'm not giving up, in fact I'm going all in. But in a mere amateur sense.

Ever since I started everyone I know asked me when I was going to go pro. My reply has always been a constant "never" and I intend for that to always be the case. I enjoy brewing, I never want have the pressure of it being the way I pay the mortgage. I admire the shit out of anyone who does.

Get it? It was easier not to brew. If procrastination were an Olympic sport I'd be the Michael Phelps of it.

Only trouble is, I love brewing. So I'm in the middle of a hatched plan to relight the fire.

I've been tyre kicking for ages, researching, making spreadsheets, scouring the internet for bits and prices and methods. I want an electric system, the holy grail of which I think is the full electric HERMS at at http://www.theelectricbrewery.com/  #swoon

I had mentioned my plans with a mate who said he had a crew of guys ready to invest so we went off on a tangent on a plant big enough for 5 active participants. We priced a made-to-order up (huge thanks to Chris Banks), looked at Braumeisters, looked at Sabcos, Farrahs, you name it. Then we saw a 100l plant on Trademe that Karl @ allgrain.co.nz was selling and jumped. Looking forward to brewing with that bad boy soon.

But I still wanted the absolute pleasure of brewing at home – being able to go downstairs and just brew. So I needed to sort my own kit out as well.

I can easily upgrade to HERMS later by buying another pump, another pot, some stainless coil and fittings.

Bits and pieces have been dribbling in by courier, new round cooler mash tun, element and some fittings, pump is on it's way. I decided on a centre inlet stainless head Chugger pump: http://chuggerpumps.com/home-brewing-pumps-chugger/chugger-pump-pro.... Apparently they've overcome some early thermo-meltdown issues, the larger centre inlet helps with priming, the stainless head an obvious upgrade over polysulfone. Word of warning, don't buy this from Amazon, buy direct from the Australian distributor as he's much closer should anything go awry and offers a fantastic level of service. Price is roughly similar – Amazon's price for the pump is far less but their freight was $150. Ouch. Both a touch over $300 landed.

I got some cheap pots off trademe against my better judgement. In an all electric system the thin base doesn't matter one iota but they still feel like I cheaped out. We'll see. My old hot water copper HLT and kettle and two other halves I had spare paid for my new stainless HLT and kettle – scrap copper is worth heaps!

I have on order more fittings from Amazon and allgrain.co.nz en-route and when they arrive I'll have all the gear to start brewing using an improved version of my old process – with all new gear. The only bits missing will be the stainless bits required for hoses and connections to get the pump integrated, and the counterflow chiller. They're next, as budget allows.

So with all these bits coming in I needed to start on the base for the whole system.
Today was brew stand day.
Disclaimer, I have access to an enviable shed full of gear and every powertool known to man. And a legend of a dad who provides me free access to all of it and a wealth of practical knowhow to boot. So we spent this afternoon cutting, notching, measuring, hastily getting power tools back inside when a thunderstorm hit, rushing away to get the kids home for dinner after realising it was 6:15pm. 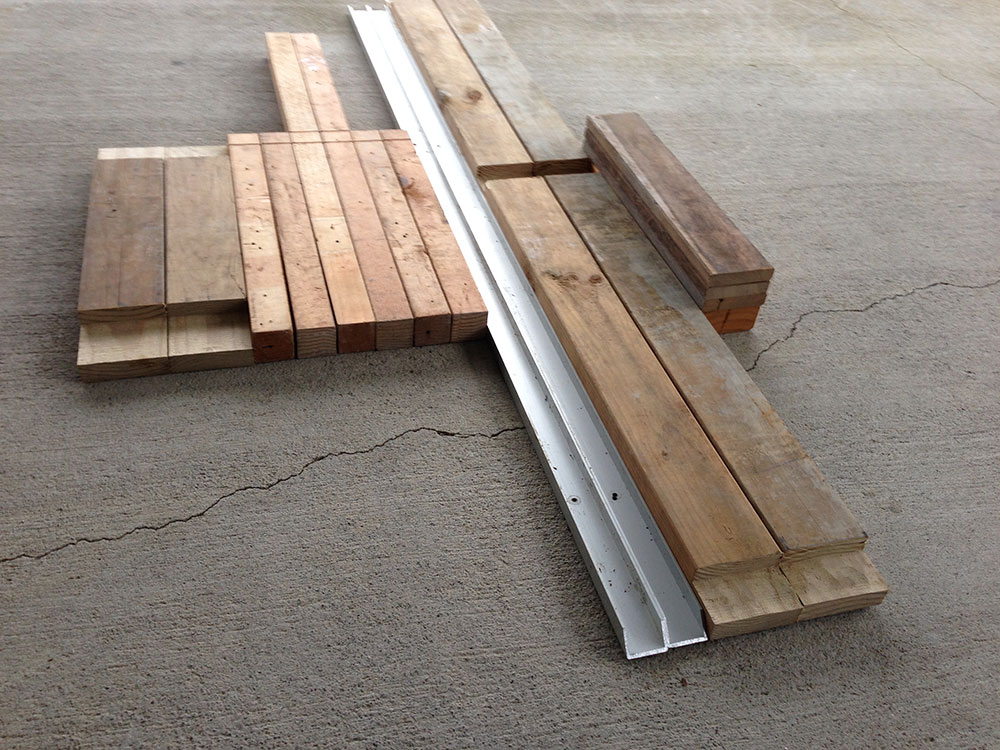 One side assembled photo: 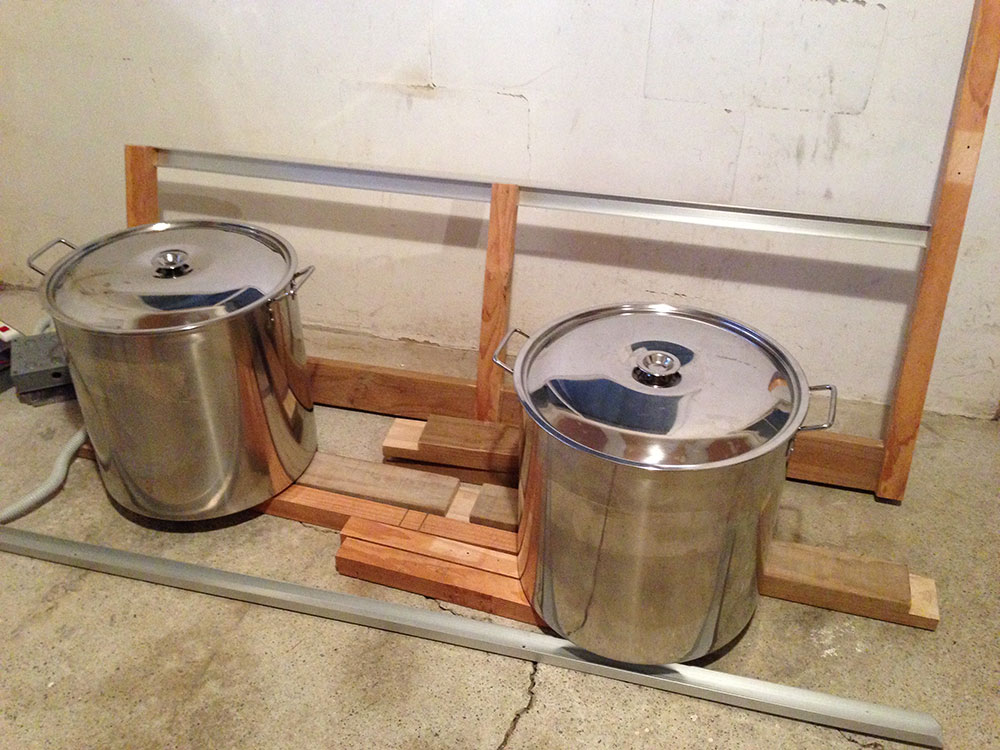 Tomorrows project is full assembly (glue and screw) and then letting the kids loose with some matt black spray paint. How else are they going to learn how to tag the neighbourhood?

Total bill for this project will be a shade under $2k. If anyone wants to check out my 3 pricing spreadsheets, flick me a PM with your gmail address (it's a google doc so you need a google login) and I'll send you a read only link. They're probably a general reference only as things have come off since they've been bought and the spreadsheets are in a constant state of flux.

My previous attempts to document such projects have been a total flop (remember I'm an Olympic level procrastinator) but as this project now feels like it might come to fruition I intend to photograph and blog for as long as I have the energy to do so. Hopefully someone finds it interesting or informative or at least amusing.

It's been refreshing seeing your name appear in discussions again - I've drawn a fair bit of knowledge from lurking amongst your posts before your sabbatical - your NZ draught recipe is one of my staple old school brews now and has opened up a whole realm of lower gravity recipes with nicely balanced hopping.
And completely in agreement re. the dearth of the likes of JoKing, Mike et al.

Interesting to see you go down the electric route - I've done the same, inspired by the same sources. I'm single tier electric, 2 pumps with a HERMS setup. I've recently added a grant which has quite a few benefits including allowing you to monitor the clarity of your wort during recirc until it's really clear - fantastic for reducing trub in the final product into the fermentor.
Plus, cos it's electric and controllable, it's really good to get to the point where you can relax in your brew day without fighting to keep strike and sparge water at a a constant temp and to being able to shorten the brew day using some of the benefits of that particular setup.

A note on The Electric Brewery brew process though - Kai advocates continuous recirculation throughout the mash and cites higher efficiencies and super clear wort as the outcome.
During a conversation I had with Shane Morley from Steam, I mentioned this and he indicated that it was going to end up abusing the wort and stripping lipids out. He advocated being as gentle on the wort as you can - which is one of the reasons I built a grant to stop the transfer pump continually thrashing the wort during the transfer to the kettle and to only work in small bursts.

Anyway, if you are interested in looking at what an electric process can look like, feel free to PM me to check out a brew day on my gear.

Re: Kai vs. Shane, I'm with Shane every time. Kai is a super technical guy, but he focuses on maximum efficiency, and is usually sacrificing variables in his various tests in order to optimise one or two. Shane is a freakin' master brewer, and if he says it, it's gospel in terms of "in the real world" knowledge.

Hey Druid, yeah I'd be most keen to check out a brew day on your system. Did you go the whole hog with PIDs etc? Thing I like about my humble start is I can add all or any of that at some point in the future. Next big step would be another pot, pump and HERMS coil.

With my single pump system and batch sparging I'll sacrifice some efficiency, particularly on bigger beers, but it's what I've always done so no biggie to me. I could still recirculate just through the pump and back into the top of the mash tun but I'd probably lose a bit of heat and although I can see some clarity benefits I'm not super worried. My finished beer is reliably bright even on my hacky old transfer-by-five-litre-jug system.

I've been using an all electric system for years, it's definitely my preference.

I've got HLT and boil kettle both controlled by PID's.

I pretty much went for a big-bang approach and built the twin PID controller setup and the two electric vessels at the same time.  I can understand doing it gradually though - it's quite a bit to integrate in one hit and not just physically; getting your head around it mentally and from a process point of view can take some time.

Nice work Barry, glad to see you've got the mojo back. I'll look forward to seeing progress on the brewery!

Hey Barry, def noticed the dimishing of the old guard too, yourself included. Is good to see you arent going to let a few glitches get you down. And shit, at the end of the day, its your beer mate, you made it and it will always be something you are proud of, even if it isnt what you were aiming for. The time away will have made you the better for it, I look forward to reading more of your posts!