It's been a while since I've put a blog up - so I thought I'd put up something useful to y'all. Tyler and Mike were over when they saw me do this, and I think that both of them are doing it now. I don't know how may of you are doing it, but it's worth doing if you're not - as I haven't noticed any detremental effects on the beer when you do it. So, what am I talking about? Wort recovery... thats what. It starts after you have transferred your wort into the fermenter. Generally I cut off when I've got too much break and hop material getting sucked into the fermenter. Here is what it looks like: 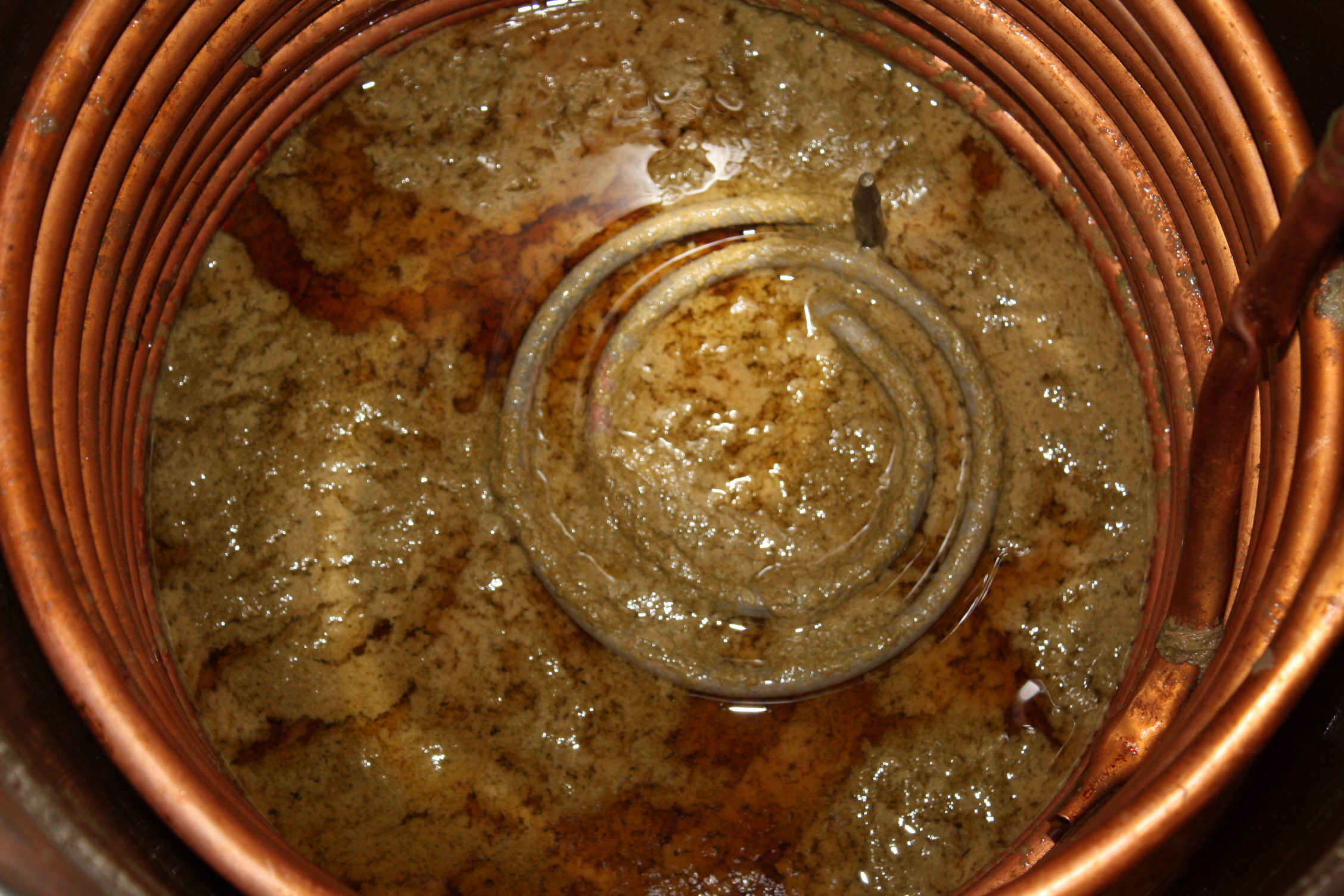 As you can see - there is still a lot of good stuff in there. So, as part of the clean up, I just pour all the crap into a couple of Jugs - I take all the break, all the hops... and all the wort: 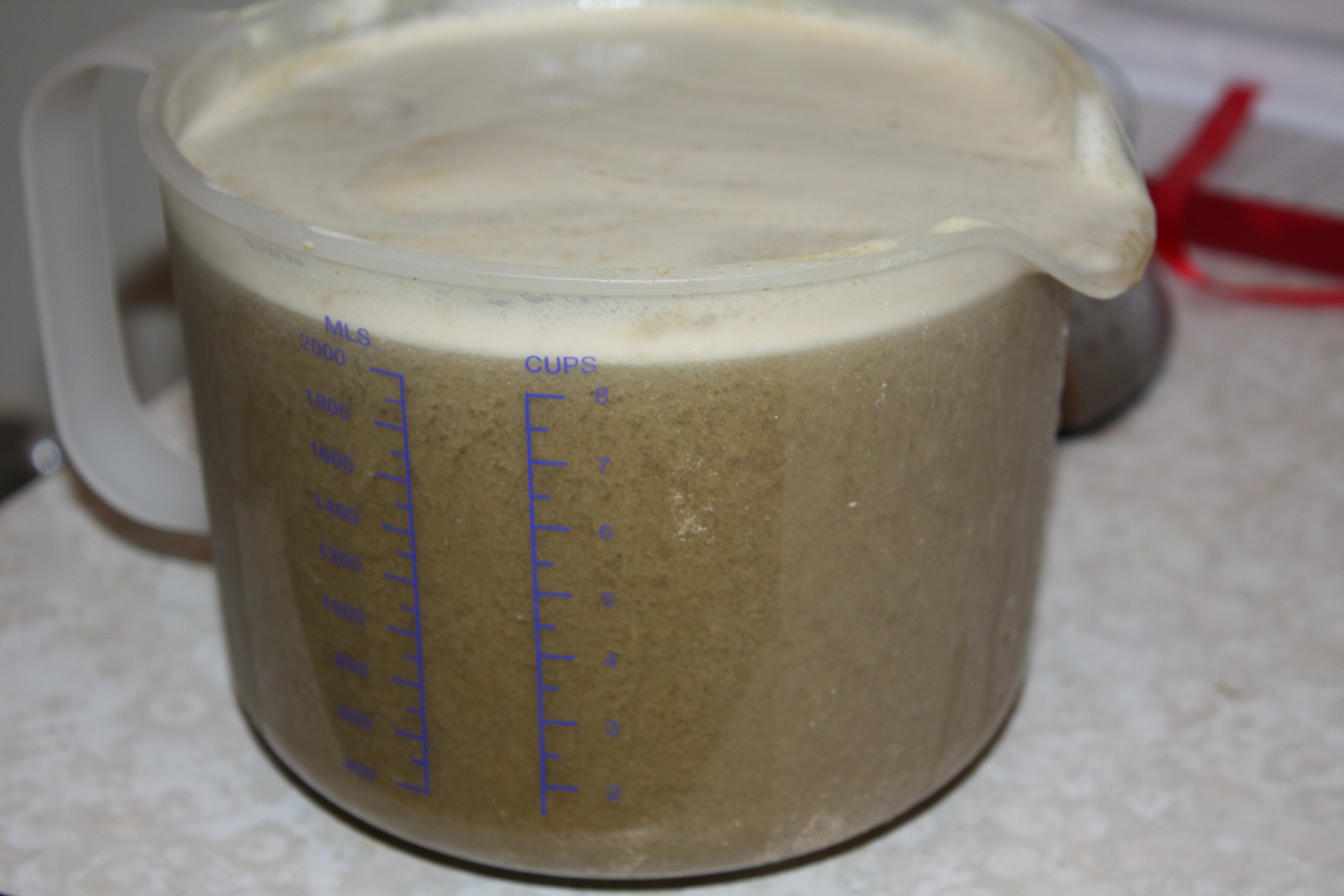 After this, I chuck them in the fridge overnight to let them settle: 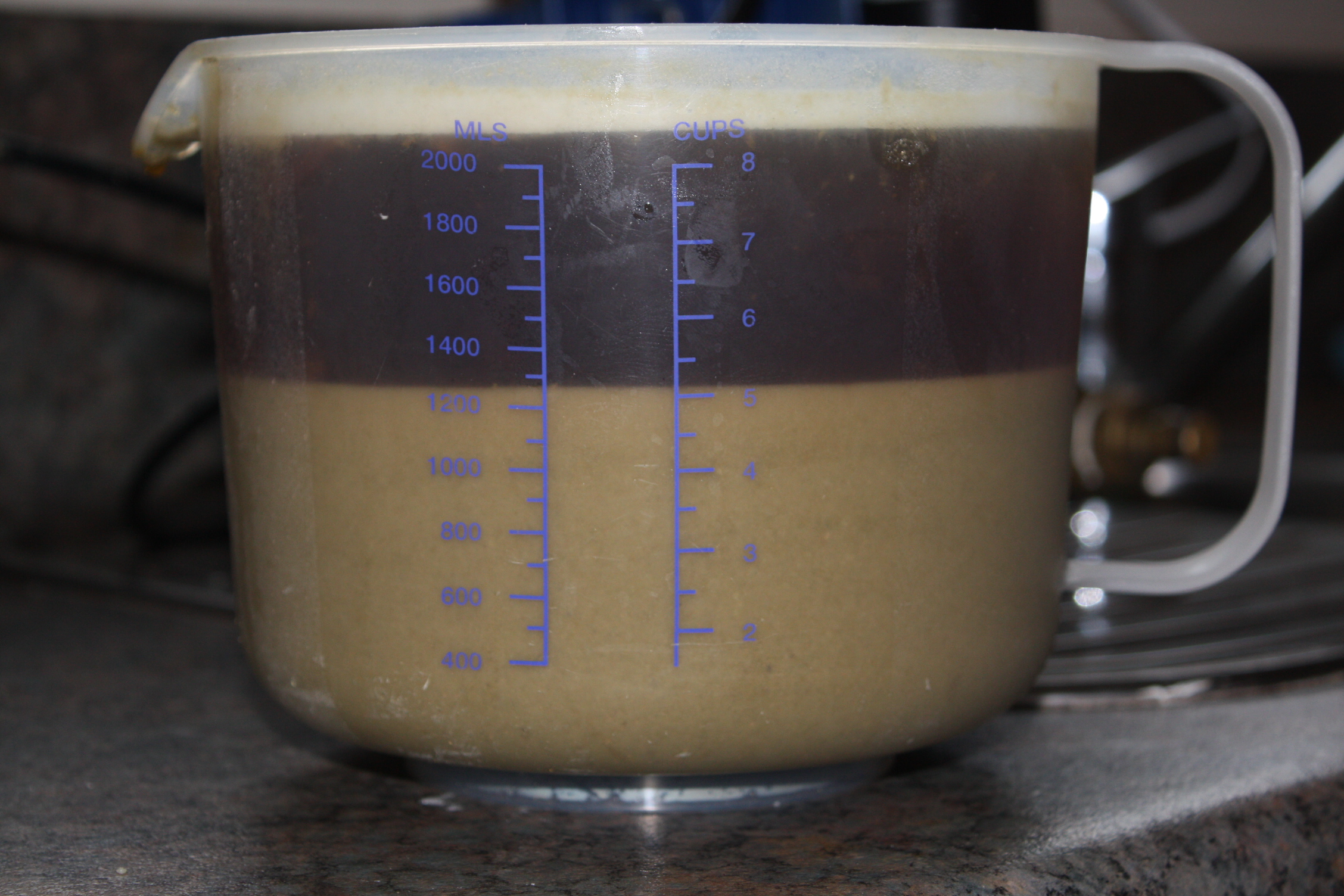 Once you have recovered your wort, you can either boil it in your flask as you would a starter, and add it you you beer which should be fermenting by now. Or... Depending on the worts composition, it might make a perfect starter solution. What I mean by this, is if you haven't added too many hops, or if the gravity isn't too high: A perfect starter should be lower than 25 IBU and should be 1.040SG. However, there is a simple calculation you can employ to make your recovered wort perfect for a starter by adding water. In this brew the IBUs are around 40, the SG is 1.058 and I have recovered 700mls of wort. So, the following applies: 700mls * 58 (based on the SG 1.058) / 40 (based on the SG that you want) = 1015mls... The IBUs can be calculated now, using the previous and new volumes: 40IBU * 700mls / 1015mls = 27.6IBU (based on the diluted IBUs from adding water). 1015mls is the total amount of wort you will have to make your starter with, meaning that you'll be adding 315mls of water to the recovered wort. The IBUs will be about 27, which would make this wort pretty much ideal to make a starter with. With that in mind, I will keep the recovered wort from this brew instead of adding it the the fermenting beer. It makes making starters more affordable, as you're not having to fork out for Canned Kits, or DME. Once it has been diluted, you just bottle it in a PET bottle and store in the freezer. Then when it comes to making your next beer, just defrost it overnight (or in hot water), boil in your flask, cool, add yeast and pitch as usual. Cheers.

Comment by jt on June 28, 2009 at 12:00pm
It makes making starters more affordable, as you're not having to fork out for Canned Kits, or DME.
Yea that stuff is pricy these days eh ?
I've been considering reusing yeast lately but don't
a) like visiting my local HBS to buy or,
b) like the cost of LME / DME
Might just give it a go, cheers, chap a picture or two is priceless

Comment by Mike Neilson on June 28, 2009 at 12:00pm
I had to do this yesterday as I put 19 in to the fermenter and had 6L of whole hop cones and trub left over in the kettle, I sieved the lot and ended up with 4l of trubby worty shit put that into the fridge for 3 hrs and came back to 2.5L of wort and 1.5 of trub boiled the wort again and chucked it straight into fermenter!! NICE!!!!!

Comment by Reviled on June 28, 2009 at 12:16pm
This is definately a good way to save a few pints that were only headed for the drain :o) Waste not want not lol

Comment by JoKing on June 28, 2009 at 6:58pm
Hops aren't important for the yeasts metobalism. However... they dont hurt. The only reson I say 25 IBU is because it's a general indicator about the amount of hop resin in your wort. Too much of this is harmful to the viability: It coats the cell walls which inhibits the uptake of nutrients, and also could lead to mutated cell division. There's no need to panic about it though - I've re-used yeast from IPAs and cant say that I noticed any funny characteristics. Other strains might complain about it though.

Comment by Mike Neilson on June 28, 2009 at 7:40pm
Heres another tip; use it to prime kegs and bottles krausening hmmm real ale!!

Comment by Tom Innes on July 3, 2009 at 11:31am
I'm not up to starters yet but boiling and adding back to the batch sounds like a good plan. Why tip out good beer!

saw Brett Mason had posted about using this method so thought I'd bump the blog for new brewers...

This is a good idea. Thanks for posting. I have often let the hot-break settle and drank the resulting highly hopped green wort. Making a starter is a better idea.