This weekend, I had planned to brew another West Coat Blonde Ale - however there were many things to consider last night while I was dreaming of brewing. It was my 1st brew for a whole fortnight... so I was rather excited. Firstly, I had been down to
White Cliffs Brewery to pick up some lager yeast for
Mike Nielson after a short discussion about what yeast he should use in a recipe he was planning to brew. To make sure the yeast was clean - I made a 1 liter starter (stirplate) with a coopers lager kit to 1.045. I had intended to use this pitch of yeast for the Blonde... but it was waring on my mind. Then, I was contemplating my current levels of stock and cross referencing my planned brews. I realised a possible clash. This is my Celebration Ale I'm planning to brew shortly and the fact that it needs 7.5 kilos of Golden Promise: the malt I have been using in my delicious Blonde Ales. I only had about 11 kilos left in the sack - and the Blonde needs 5 of them, leaving me with a probable shortfall. I was getting restless in my attempts to sleep. Finally the straw that broke the Blondes back was that I was feeling too stingey to spend more of my precious Simcoe hops in another brew. I had planned to use Nugget in the Blonde and was worrying that it wouldn't work. I decided "Fuck it". If I am going to recommend that Mike use WyEast 2112 for the dark beer he was planning, I'd put my money where my mouth is and #4 at Hallertau was tasting Oh so good last week. I could definatelty do with a keg of that in my keggorator of death next month. I got out of bed and formulated the following recipe: 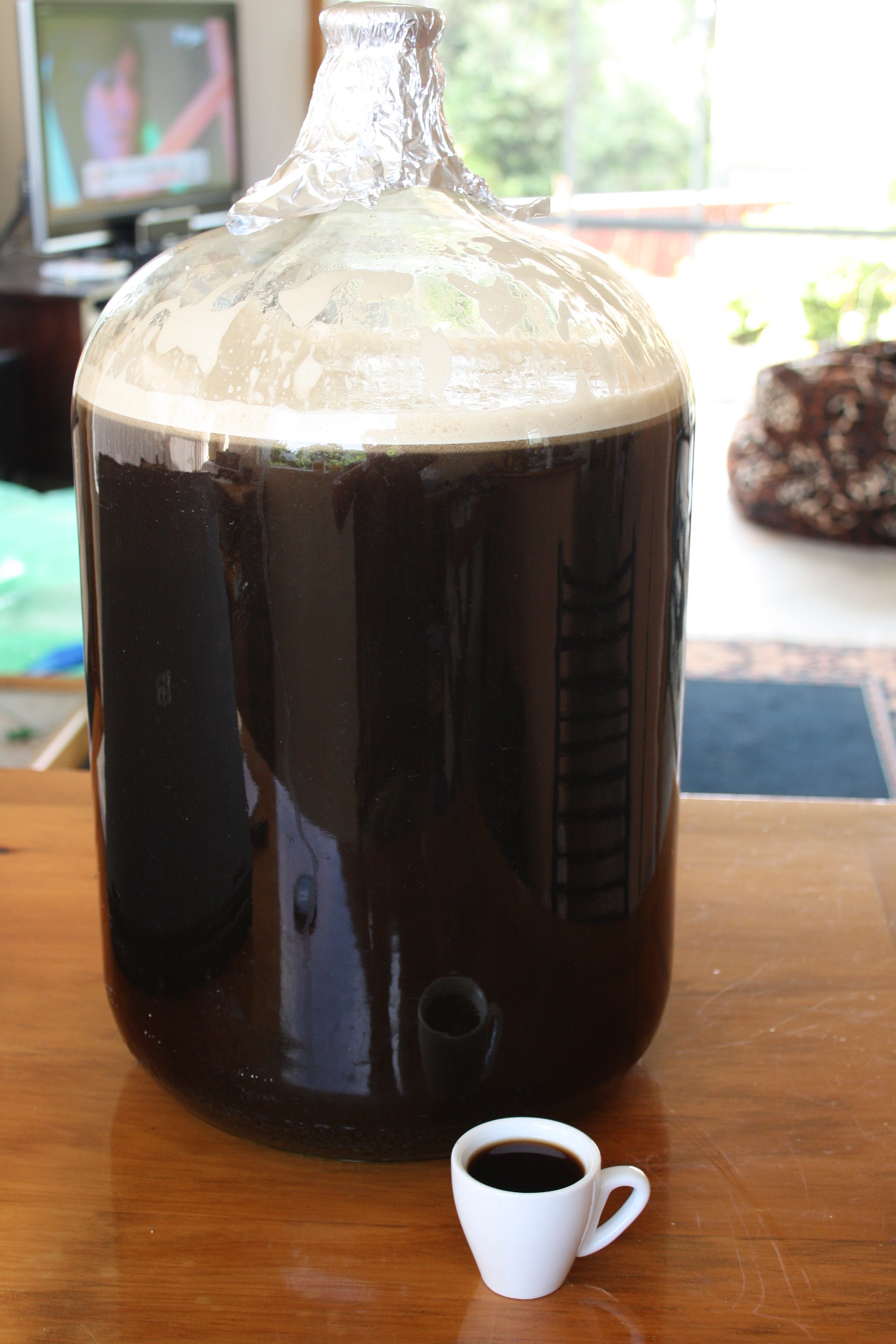 Comment by Martin Bridges on February 1, 2009 at 5:27pm
That looks beautiful mate. Might have to "borrow" that recipe, but not the name!

Comment by JoKing on February 1, 2009 at 5:31pm
Thanks Martin. Just wait a month - and you'll get a chance to taste whether it's worth brewing or not.

Comment by Greig McGill on February 1, 2009 at 7:35pm
You need to get Lemmy to endorse this beer. Possibly with a photo of him chugging one and throwing up the horns.

Comment by JoKing on February 1, 2009 at 7:39pm
Sorry...but I'm totally lost with that one, Grieg... You're gonna need to explain!?!? But whoever Lemmy is - he is welcome to come over and spew my homebrew every where! As are you, Greig!

Comment by Greig McGill on February 1, 2009 at 7:56pm
You named it Ace of Spades... not a tribute to Motorhead then? Featuring Lemmy Kilmister and well known abusers of the Heavy Metal Umlaut? For shame! I do need to visit. I've never really "done" the 'Naki, except for a brief visit to White Cliffs and a cricket match. I'll make you regret your hospitality! ;)

Comment by JoKing on February 1, 2009 at 8:01pm
Aaahhh - Motorhead. Sorry mate, too vague for this simpleton! Nice reference though - I like the romanticism associated with such a tribute. I just had some famiy visit and they made me regret my hospitality too (in a way): no more Blonde Ale left - they ran me dry. A complement and an insult at the same time. I'm glad they liked it so much, but I'm annoyed that I dont have any left.

Comment by Greig McGill on February 1, 2009 at 8:05pm
I had the same problem today with my rather tasty APA. I think I had maybe 6 pints myself from the whole keg! I sent Kempicus a flagon, he thought it tasted like Emerson's APA. That might have been why it vanished! :)

Comment by JoKing on February 1, 2009 at 8:13pm
Not to worry... I'll make sure you get a bit of my latest Pale Ale. It wont be the same as your last batch I'm sure - but at least it's the same in style. Small compensation, I know - but it's the thought that counts right?

Comment by JoKing on February 11, 2009 at 10:51am
I have been enjoying a prolonged fermentation with this brew - but it's time to kick off a bit of crap in it. I checked the gravity on Monday, and she was down to the 1.022 mark from steady fermentation at 14 degrees. I turned the fridge off at this point, and the brew has met a steady rise in temperature over the last couple of days up to 20 degrees celcius. I dont mind the temperature sitting that high, as there has been a bit of sulphur come out from the airlock. Sampling the hydrometer beer was quite positive: nice coffee note - very smooth... aggresive mouthfeel in terms of bitterness: definately moderate. Hops work with the dark beer so far. A little canned corn the other day, but not percieveable now. A small amount of diacetyl on the palate should condition out at this temp before I start the lagering process.

Overall, I'm quite happy - but wont get a firm grasp on the brew until a fortnight at zero which will start 2 weeks from the initial kick off of fermentation: Monday 16th of Febuary. My assistant brewer will oversee this process.