More bits arrived today. Enough to go forth and build my panel.

I spent the last few days getting the paint done, making sure all holes were drilled and clean, bits of filing and touching up paint, etc.

Last bit of drilling was to tap holes in the heatsink for my SSRs, and through the cabinet door for two surplus kitchen handles I had left over.

Tapping the holes was clean and easy, I recommend this approach over nuts.…

A pretty hard out half day spent today cutting holes in my control panel. It's now ready to paint.

I still have a few bits and pieces to arrive but have enough to be comfortable hacking through steel safe in the knowledge I've measured thrice.

I used a jigsaw and did a lot of filing for all the rectangular holes, every single round hole was accomplished with chassis punches. Thus they are clean as a whistle, so satisfying.

Photos are of the stress test –…

Got enough bits arrive to tempt me into beginning to mark up my control panel. I did enough of that this evening to ensure I don't do a single bit of cutting until I have absolutely every piece of the puzzle.

My control box is just so tight that I had to adjust things like the position of the far right timer because it might hit the side of the box as the door swings shut. And the excessively large machanical relays within have to be placed very carefully…

Dip tubes/inlets done, thanks to the kind lend of a pipe bender by Peter Smith – cheers!

Made short work of some bloody hard stainless, and good learning – last one is the best one. 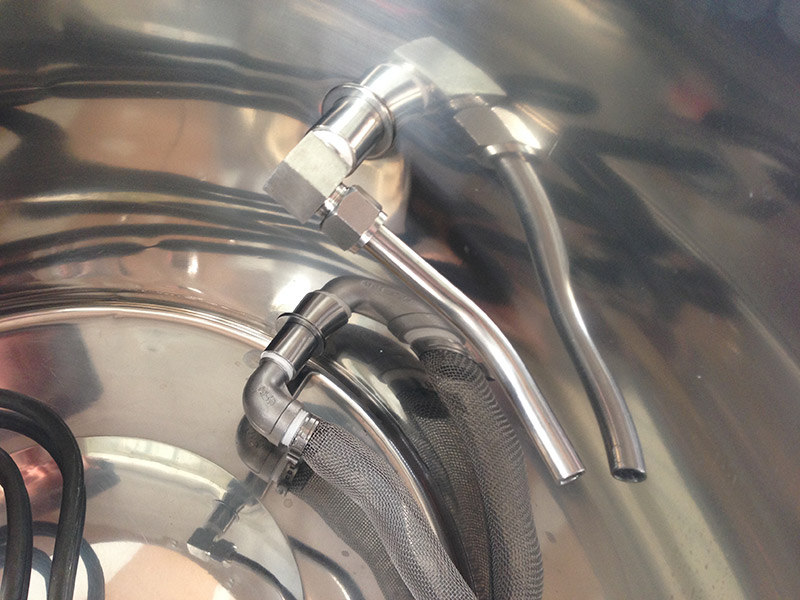 Sorry for the lack of contact - I have just resurfaced after being belted by an unexpected medical curve ball.

Thanks for info about where to go for parts I will be chasing them up in the next couple of days.

As soon as I learn how I will post photos of some 'before and after' shots of the stripped and polished metal components from the Engine - really impressive result.

Got all my vessels completed, all that's left to get going is the electrickery (so still quite a bit then).

I had mixed experiences with some of the fittings, all four taps through the pots seemed to go together quite differently despite each pair of them being made up of identical parts inside and out.

But they all passed an initial leak test, not with vessels full but with me…

Just finnished my first prototype but i'm not sure if its too fast, using a varible voltage adapter so it has like 4 speeds.

Massive thanks to Guy Gibson for the lend of the chassis punch, legend.

I'm doing these following theelectricbrewery.com's instructions to the letter – 2 gang metal junction box, faceplates either side, 32mm hole through a faceplate on the back, element, oring, washer on the outside, lock nut on the inside. Unsurprisingly looks like it'll be perfect.

The hold up has…

Just before Xmas I became the proud owner of a 1945 Gaskell & Chambers Dalex Beer Engine. This Beer Engine has been in storage for the past 30 years. It's in original condition - and from what I can tell - is also in sound working order - except for a missing drip tray and 1 ceramic tap head washer.

But moving on to the Kauri Road Brewery, after 2 weeks of relentless busyness (honestly I've never had so…

I've heard so many disheartening stories lately about people selling their brewing equipment, indeed when I look around realbeer now there's a distinct lack of the old guard, the legends who contributed so much knowledge to the fledgling all-grain brewing scene in NZ. In actual fact more than a few of those legends are now the legends who make up the very best of the best on the shelf at your favourite craft beer outlet and dominate the awards…

The most beautiful sights in Auckland

The second largest city in New Zealand, Auckland, is just as interesting to visit his Sister Wellington. Rent a car in Auckland requires from you a short period of adaptation, since there drive on the left. However, driving is easy thanks to etiquette copy of the New Zealanders. Wellington is also ranked in the ten cities of the world where life is good. For tourists, the driving licenses of citizens of the European Union are valid.

On board your car hire in Auckland, take…

I'm New Zealand's representative for an all expenses paid competition to travel to six breweries in five countries over four weeks. It starts at Good George in Hamilton.

I'm leading at the moment but the UK contestant is catching up quickly. I'd really appreciate New Zealand beer makers support to try and win this one.

You only need to vote once at www.worldsbestbeertrip.com. You need a facebook account to vote and there is no app…

Gidday, does anybody have a proven recipe for ginger beer? I am hoping to make something similar to the Dux's 'Ginger Tom'
Can't seem to find anything around here.
Cheers in advance.

Good Day All - I found this place that sells some Hummulus lupulus x (smoothcone) and Humulus lupulus (not sure of the variety) and I'm thinking of ordering some to grow. They charge $13 delivery per box and a box can take up to 30 plants. If anyone is keen to get in on a bulk order and live in auckland let me know we can order some and arrange a day for the plants to be picked up from somewhere around Mt Eden
http://ning.it/16nGf67 - here's their…

For those brewers who are not on Facebook, or have their head in a fermentor, there is a new Brew Challenge / Swap going on in Wellington.

The challenge is all about hops, all brewers participating will be brewing a smash beer with 300g/ltr Gladfield Pale Ale, M44 yeast, and 10g/ltr of a randomly picked hop. Brewers can do whatever they like with the hop schedule, to make there beer stand out within the style of an American Pale Ale.

At the end of the challenge…

We are global documentation officers,we are a group of veteran expert than have been in this domain for quite a long time,our priority is customers satisfaction.we operate on a wide range of products like real passport,fake passport ,drivers license,diploma´s,birth certificates etc.our services are the best because we are fast and reliable.for more info´s,you can contact any of our…

How does 1 charge a keg with c02 ? as this my first attempt to keg my stout