The name beer robot comes from my 5 year old daughter who associates the lights and flashing displays with robots. I think its a pretty good application of mechatronics which is what robotics is called these days from what I can tell. She is made of three 50 litre pots which I got off trade me for about 50 bucks each. The pots look pretty good but started leaking around the base after the welding spuds for the elements were tig welded in. The welding seems to have opened up a joint between the base and the walls (which are a separate piece) due to the thermal expansion during welding. The good news is that one of the  pots self healed during the boil as the wort sealed the hairline gap. Ill probably fix the other one by boiling some wort in it! The mash tun has no such trouble as it was not welded.

The heat exchange coil is made from 10m of 12mm copper tube. It was a piece of piss to bend the copper into the coil shape around a bucket. Doing the tight bends on the ends and getting the compression fittings to seal was a bit more troublesome. In the end I used o-rings and PTFE tape instead of the ring that came with the fitting. The tube on the left is the return/whirlpool for when the water is circulated to keep the temperature in the vessel even. I used another 10m of copper for the immersion chiller. 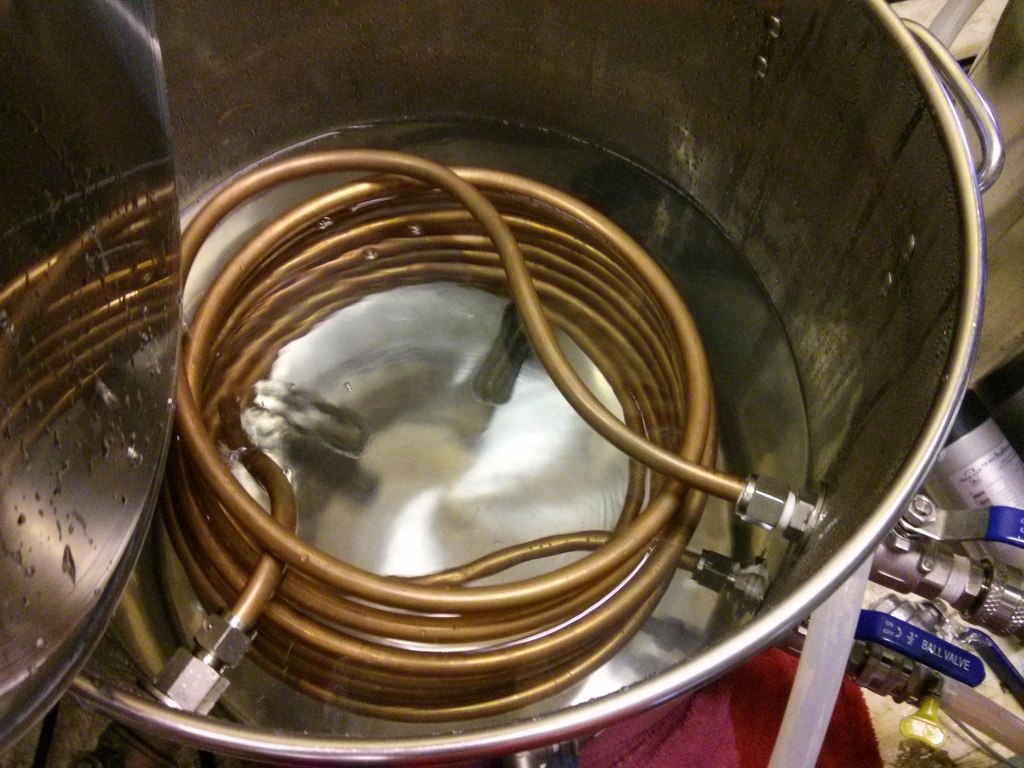 The photo below shows the welding spud and the camco 2500w element. In the end I couldn't figure out a nice way to do the wiring so I used double walled heat shrink with adhesive to provide some degree of water proofing. The earth wire pops out the back as these elements from America don't have earth terminals. I think this looks improvised but it seems no worse than the crazy epoxy aluminium setup recommended on the electric brewery sight. This heat shrink is apparently rated to 150C so it should hold up to the temperatures it is exposed to. You can see the seam that leaks water in this photo too. In my set up these elements draw about 2.2kw (measured) as the line voltage is a bit low (220v). 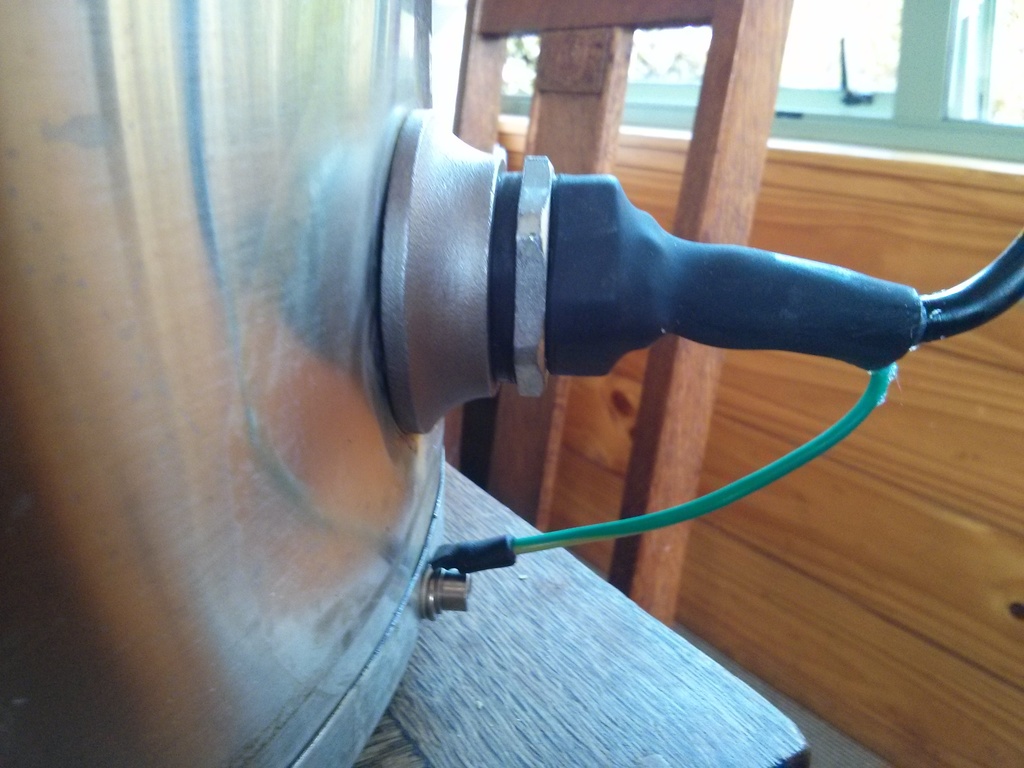 Here's the control panel. It runs from two lines hence two power meters. The HLT and kettle each have two elements on running off each line. Using the switches I can power both elements in each vessel or one in each.There's a hole for a timer which I haven't got yet. As you can see the HLT is 66.6C and the mash tun is 65.5 C about halfway into the mash.The 46watt power draw is just the two pumps and control panel losses. The third PID is giving an error because the probe isn't plugged in yet. 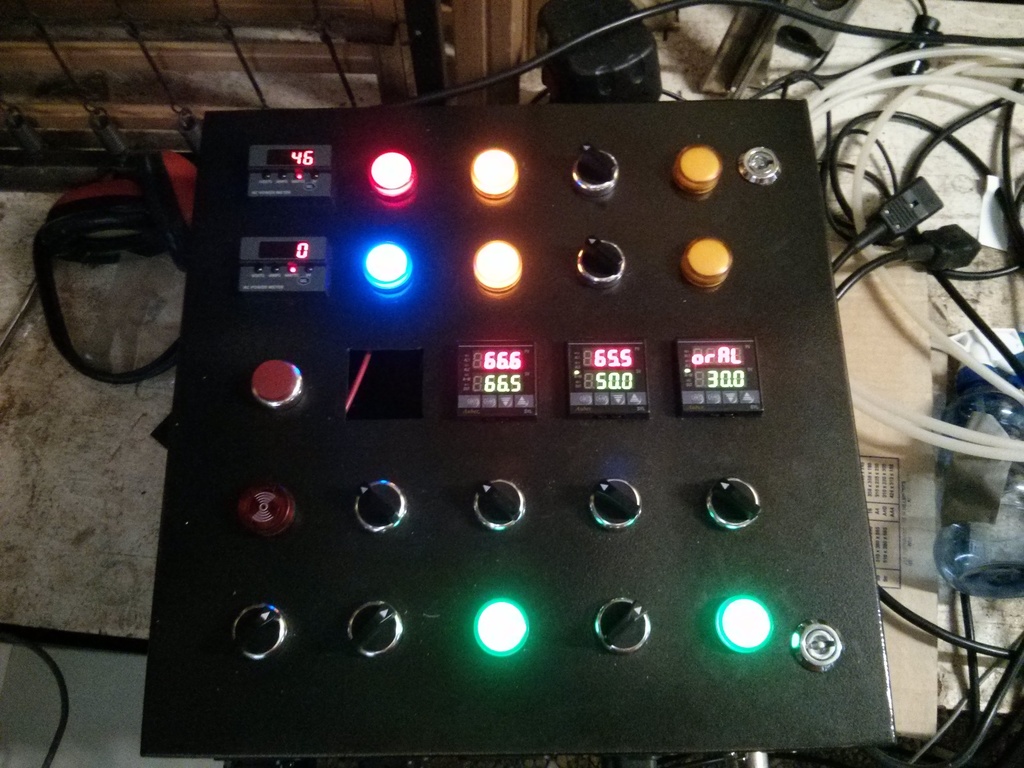 The internals are obviously derived from the electric brewery sight but I made a few changes to allow me to run two 10amp power lines. I haven't got round to labelling the various functions because I'm not really sure how to go about it.

This photo shows the power meters reading the line voltages. Power in each was about 2.1kw. The power seems to drop as they water heats up. I verified these by reading with a bench top multimeter so they are correct if on the low side. When running the pumps circulate about 4litres of wort per minute. The bottle neck in my se tup is the 3/8th hose between the mash tun filter and the tap. I think flow would be higher other wise since everything else is 1/2 inch. 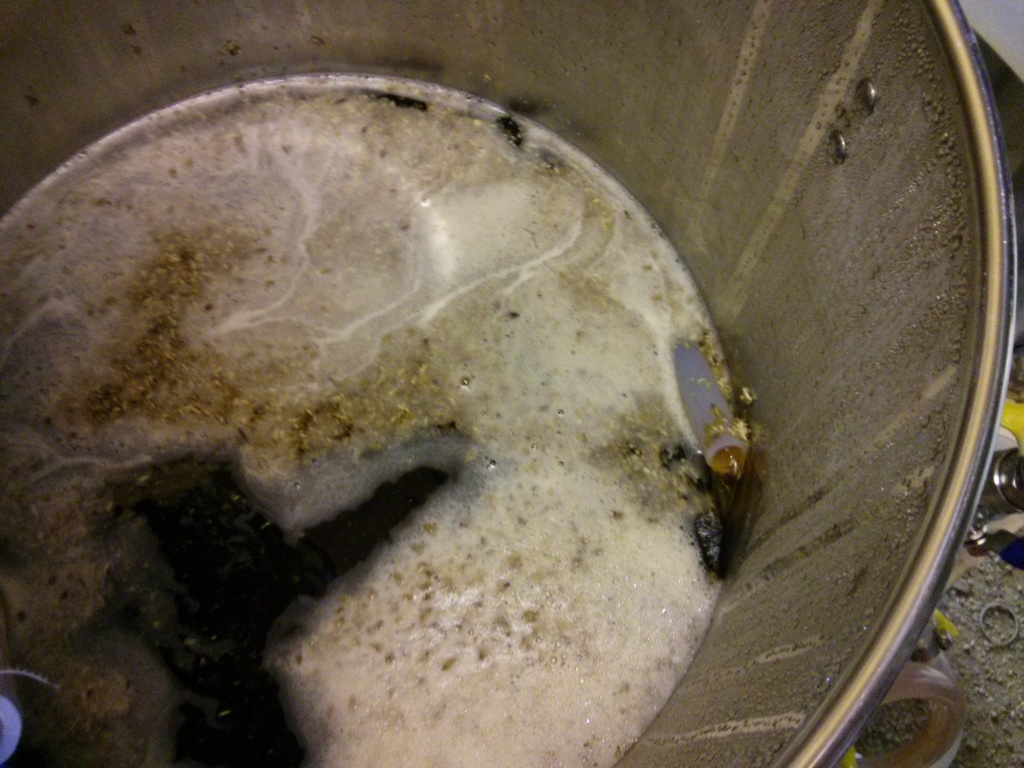 I used keg king pumps which I bought when on a trip to Sydney cause they are cheaper over there. I bought two and somehow managed to get two versions with later being the silver one. Apparently its rated to a higher temperature but they seem to work the same. 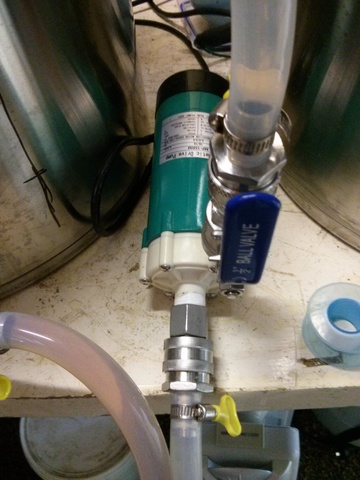 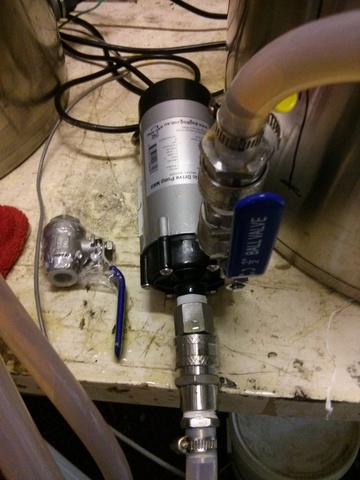 In the end it all worked well with only the minor leak. I did have some troubles with the quick disconnects leaking with the most annoying one on the mash tun outlet (air being sucked in)  which may have been because it was under suction? I got them from a few different places and some are tighter than others.

I brewed a copper coloured bitter as the first brew. I was hoping to do a pale ale but my malt order turned up all mixed together which is apparently how its done these days if your request crushed. Its been probably 12 years since I last did an all grain and in those days it used to turn up in individual bags - I'm pretty sure I used to send my hand filled out paper order and cheque to Luke Nicholas back then?!

I have no idea what the SG was since I couldn't find my hydrometer which is kind of ridiculous given all the effort put into temperature control.

Maybe the most interesting thing for others here is the use of the 2500w camco elements:

I have found that the power draw is about 9.5 amps for the line voltages I get. The description of ULWD is a down right lie and they are about half the length that they say they are. I calculated it a while ago and came up with roughly 120w per square inch. None the less I didn't get any scorching although I boiled at only 70% power because I was concerned about it and because I had a nice rolling boil at this setting. The nice thing about this compared to my brewing 12 years ago is that I could get the HLT up to temp in 30 or so minutes (nearly full - 45L) so a brew is nice and fast (remembering I have two elements per kettle).