Raising the profile of Craft Beer in New Zealand

So incase you are all wondering why subscribers to NZ Craft Beer TV on Twitter and FaceBook are getting inundated with the Luke and Kelly’s TV show, and even seeing the items pop up right here on realbeer, I thought I’d take the time to lay down a discussion for y’all.

It’s all in the name of promoting craft beer in NZ, and raising it’s profile here in the good old NZ.

I’m gonna put it on the table right now before it’s too late and say that in my eyes, It’s certainly not about promoting “Epic Beer” or trying to raise the profile of that company. Initially for me, because it was organized by Luke – my initial suspicion was that it was all an exercise to promote the Epic Brewing Co. etc. A lot of people have dismissed this to me as stealth marketing – for Epic. As I have nothing to do with Epic, you an take it from me that it has about as much to do with Epic, as it does with the other 44 breweries involved in NZ Craft Beer TV.

Please take the time to read below an email sent to me by Kelly Ryan of Epic Brewing Co.

As some of you know, we've completed the first episode of NZ Craft

Beer TV that you can all see here in its 2 parts:

involved in any way, shape or form that you can. This means hitting

the social media circuit as much as possible. Put links to the videos

Twitters, embed the videos and really drum up interest.

There are also a few questions regarding the series and collaboration

Any other queries, please let us know.

This has taken a lot of time and money, but we honestly believe that

the more promotion this gets, the better off it has to be for New

help us out and get it out there. We're beginning to get interest from

abroad, people wanting to try the beer and folk who are genuinely

interested in the series, the concept and to satisfy their curiosity

With regard to the timeframe for the forthcoming episodes, we are

to just do a voiceover for one episode!!), but will get it all out

Any support you can think of and provide would be amazing.

media contacts so they can check it out.

Now, why leave it to the breweries to have all the fun promoting this? Realbeer.co.nz is the largest craft beer enthusiast / home brewing community in New Zealand. It’s time for all of you to step up and show some support.

I read on here all the time about how you all have tried to “convert” conventional beer drinkers to craft beer drinkers. It’s a commendable move… keep it up.

What else can you do to promote craft beer in NZ, so that we can increase the national consumption from 2 – 4% to 100%? Get your selves motivated to do something for this community that has literally CHANGED YOUR LIVES.

Don’t just sit behind your computer and read this, then do nothing about it. DO SOMETHING. I can’t tell you what it is… but lake they said over at Nike… JUST DO IT!

If you know someone who knows someone and can make a difference – tell them about NZ Craft Beer TV.

I for one will be changing my Avatar on Realbeer, Twitter and Facebook to the NZCraftBeerTV "Mash Up" label. I suggest that you do the same! Like a BlackOut... but rather a "MashOut".

That’s all I have to contribute for the short term.

Have you thought about releasing an AVI (or similar) version of the films as a torrent?

I for one am a bit old fashioned in that I like to sit on the couch and watch vids through the TV instead of at my desk. Hosting the vids for download like this might be a bit costy in bandwidth for your site but torrents would get around this.

Permalink Reply by JoKing on May 12, 2011 at 11:12am
Are you talking about libertybrewing to host a link to a torrent?

I'm glad you have written what you have Joe. I can only add that I watched the two videos that popped up on the realbeer site and enjoyed them immensely. At no stage did I even have an inkling that Luke was punting Epic in any way at all and I would assert that it would be a most unwarranted assumption for anyone to state that it was. The guys come across as passionale and humerous and, more importantly, informative on all things craft brewing/brewer related. I have always wanted to know more about the small breweries in NZ that I have never seen or sampled, and those videos were just the ticket. Where can I see more of them?

PS I agree that a DVD with the lot would be great.

Thanks for your response Ian.

I agree that it's awesome to be able to tour all of these breweries, and meet the people without having to even walk out the door!

Permalink Reply by sleeping on May 14, 2011 at 1:01am
let's wait for an episode where Luke tastes and comments on the beers they are sampling....

Permalink Reply by Chris on May 12, 2011 at 12:34pm
Yeah if you created a torrent link and stuck it on the site it would get around the problem of you having to host huge video files for download (the files would be stored and shared on/from user's own machines). Torrents get a bad name for pirate media, but they're awesome for legit stuff.

Joe, thanks for the support, really appreciate it. Especially the "MashOut" idea.

Chris, yes as time prevails we will get the episodes out in as many formats, and through as many channels as we can, so as many people as possible can see it at there convenience.

Ian, thanks for the comment. Yes a DVD might be worth a crack, probably the most convenient way to get the full series of HD versions out.

Right now we are working on sales to get Mash Up bottles out to as many places as we can so everyone can get a taste. Hopefully it will also be a reason that some new people start to drink craft beer in this country, which was one of the intended out comes from this beer and project. 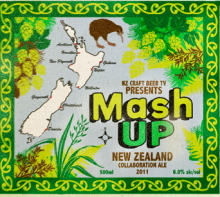 Permalink Reply by Dan Filihiahekava on May 13, 2011 at 11:36pm
^ Ive also done the same on my FB account . Also when i go to parties , BBQ  ,family get togethers and even a mates wedding (got total shit for it hahhaha)  i always take a good number of NZ craft beers to share with mates and family and give them a taste of whats out there and how good it is , because not all beer tastes the same !

Permalink Reply by sleeping on May 14, 2011 at 12:59am
prob doesn't help that the first of the bottles that have hit stores have the "mistake" of having Epic bottle tops.

and they end up in the Epic section of the "NZ craft beer" fridges......

but don't get me wrong, I love the beer, taste awesome on tap (haven't had a bottle yet) but disappointed that so far the series is so light-weight and feels like a marketing exercise for the mashup beer which is only coming from epic at the moment.