Has anyone tried probiotic capsules as a source of Pure Lacto strain?

Saw a youtube where the sour lacto culture was from probiotic capsules,  safer then using grains if after a pure culture I suspect.

I was so impressed with the Deep Creek  Kiwifruit Tequila Gose, going to have a try.

8 Wired use Yakult Probiotic Yoghurt plus another couple brands to do their Palate Trip beer for GABS. Look up the Brew Hui Podcast, he spends a couple days with them when they brew it. Soren said he liked the Yakult because it details the strain and how many cells are there.

I would look into this;

This probiotic contains Lacto Plantarum, which is a widely used / discussed strain for inoculating Wort with.  20 Billion cell count per capsule.

I have made two Kettle Soured Berliner's in the past couple of months so am by no means experienced, but I did ask around for some advice.  After speaking with a couple of pro brewers locally and scouring the web, this was one strain that was often used and this particular brand was recommended by a brewer here in NZ.

My first brew was inoculated with Uncrushed grain and the Lactobacilus that is present, while for my second brew I used these probiotic capsules. I think I used four or five for a 23Lt batch (so 30 capsules will last at least 6 batches). It dropped the pH of the wort down to 3.7 in around 48 hours and produces a nice clean lactic acid flavour/tartness.

Check out the Milk The Funk group on Facebook and also their Wiki, which has a great amount of info on all things sour and funky. There are a lot of home brewers using Plantarum with good success.  There is a simple Gose recipe on their Wiki also, that I am going to give a nudge in the next few months.

There is also some really good info in the Brewing Network Podcasts for the Sour Hour show. I think episode 4 discusses Berliners and Kettle Souring.

Here's a pic of my Berliner soured with Lacto. Plantarum. 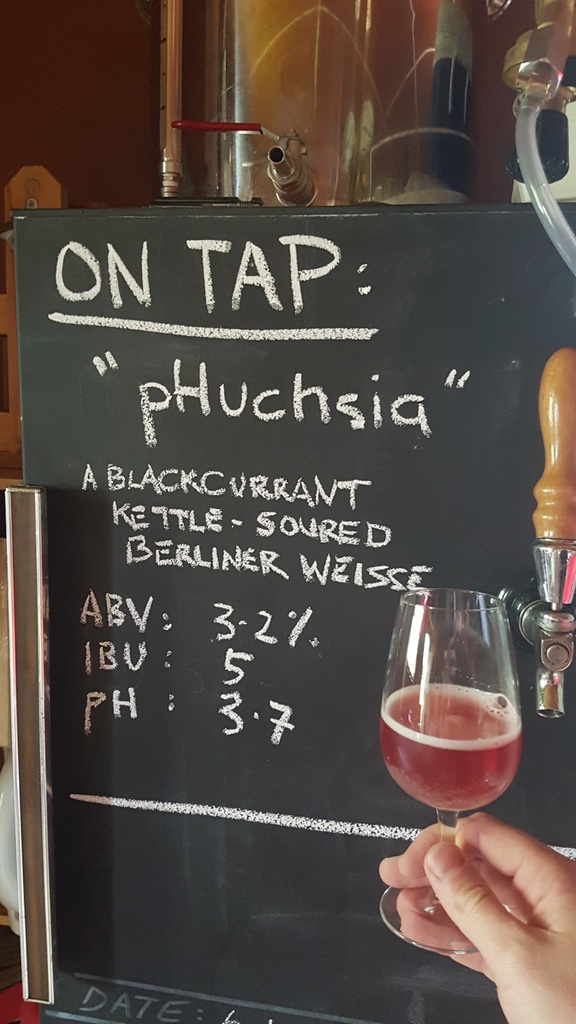 Did you try Deep Creek Brewing - Tequila Kiwifruit Gose - at  GABS, damn thats a great beer.   Its my inspiration for this as well as 8Wired Trip Palette,   TP is way to easy to drink....   I have a copy of American Sour Beers.      Did you just empty the lacto capsules in or do a 1L starter,  I am thinking starter myself.

Picked up the mixed 6 pack though from Liquorland and definitely enjoyed the Palate Trip by 8 Wired.  The Funk Est Berliner was quite nice too for an easy drinking simple sour.

I didnt bother making a starter, as you know what cell count you have depending on how many caps you use...however you can definitely make a starter to get it going. My process for kettle souring didnt require a starter, but are you kettle souring or souring as part of your ferment for long term souring?

I was going to boil the wort for 10 mins to kill off any nasties, cool to 48C and leaving the kettle on this temp for sour, pitch Lacto starter into that after a co2 flush and possible ph drop with food grade acid, then let Lacto take ph down, just boil from there once ph has dropped,   thinking a decent slurry of us05, thats supposed to be ok in a low PH wort.

I am just waiting on some ph calibration fluid I ordered and I guess a decision on the Lacto source, may try both your way and the 8wired Yoghurt for respective clone attempts.

The brewhui podcast is great,  the entire recipe is in their.   Most of me beers lately have had huge whirlpool rather then 10 min additions.  As long as you compensate with correct bittering I find I get a better result on my kit this way

This has to be the most experimental beer I have made,  ph got to 3.6 and something was growing on the top, but boil is finished and whirlpool is underway,   Motueka and Centenial in the whirlpool only.   72C whirlpool, only a 10L batch.    It smells like my grandma was making jam during the boil,    no vomit or poo aromas but different for sure...

Hope it works out well for you mate.  Sounds like you might get a little bit of bitterness from the whirlpool, but a nice aroma from those two hops.

What did you end up using for your source of Lacto?

I have my 3rd Berliner finishing up fermenting as we speak.

Really simple grist. Mashed and sparged like normal. Raised to a boil for a couple of mins before cooling to 45c. Added lactic acid to drop pH to 4.5. Pitched 5 L.Plantarum caps, purged kettle and covered up. Wrapped in blankets, but no external heat so left to gradually cool.  Got down to 3.2pH and had a nice Lemon and Honey taste. Fermented with MJ M44. Its down to 1.010 (OG was 1.042) - half the batch will go onto Frozen Raspberries and the other half will be bottled as is.

Its a great and simply way to brew a short turn around sour. And I think if you are careful with your process, there is no reason why Kettle Souring cant produce a decent beer...

Im interested in brewing a Kettle Soured Pale Ale next. Probably with a massive flame out addition of Mosaic and a big dry hop.